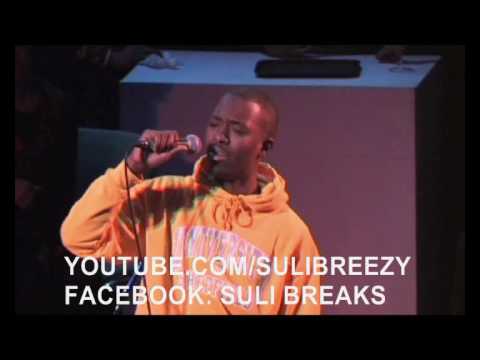 Flavour has a chat with Poet Suli Breaks.

What made you start?
It was kind of a challenge I took upon myself, I was asked to take part in a black history month cultural show. I had to figure out a way in which I could contribute, and having wrote a few rhymes and stories when I was younger, a poem was the obvious choice. I performed it, and the response was just amazing!! A few weeks later someone contacted me saying they wanted me to come and perform the same piece at an event, then after that it was another call to do this, I was told to enter a talent competition, which I won, and the ball kind of just kept rolling from there.

Where do you get your inspiration from?
I constantly get asked this question. Isn’t life enough of an inspiration. My topics vary so much that, it is real difficult to pinpoint an exact inspiration. I have guidelines though, in the sense that my faith, very much dictates what I will and will not say when I am writing, and that kind of help draw a lines when I’m writing.

What makes you different from other poets out there?
I think my versatility is what really distinguishes from other poets.I try to use as many different tools as possible with my poetry. I collaborate with other artists, I create poems based purely of visuals, audio poems. I also not only do poetry on stage but also tell stories which I feel the audience may be able to engage with. My philosophy is there is no limit to what can be done with poetry, I try and explore each and every possibility.

I have heard that you are the founder of the University Of Suli Breaks? Could you explain what the Uni is and where the idea generated from??
The “University of Suli Breaks” is basically me taking on talented poets and mentoring them to achieve the most out of their abilities. In essence they are my “students”. I allow them to shadow me, perform with me and help them with their writing, as I am learning so are they. The concept was birthed from a practice of mine. Every university I perform at I make sure I am given their “University Hoodie” (trust me, my house is full of hoodies at the moment). From there it kind of dawned on me that, I could generate my own “University Hoodie” and I realised it would have to represent something, so in the process I ended up also creating the concept behind the “University Of Suli Breaks”

You recently came, 2nd in the Farrago Uk Slam Championships’? And people are saying it, so do you feel you are/or one of the best poets in the country if not the world?
I feel I bring a different angle to the whole genre of poetry. To say I am the best would be a bold statement. I will leave that one for the fans to decide. On that note however, I would like to point out that when it comes to comparisons, I don’t compete with other poets. My competition is anyone that is/was the best in their respective industries. So I’m looking at the Kobe Bryant’s and Denzel Washington’s of this world.

What can we expect to see in the near future from Suli Breaks?
Well, at the moment I’m the process of finishing my first DVD “Poetry Is Kool”, which includes video poems, performance footage and behind the scenes footage. After that my audio CD “First Semester” should be coming out, it is more like a “poetry mixtape” in the sense that it will be nothing official like an album.. Those are the immediate project people should be looking out for. On top of that I’m going to be performing as usual so just keep a lookout for the events.

What poets on the scene do you rate?
So many people are doing their thing right now, and I even want to add a few names for promotion……lol. Well, my top 5(outside of my students) would have to be Michaela “Birth of A Poet”, Hollie Mcnish, James Massiah, Mark Niel and G.R.E.E.D.S

Why is poetry so important to you?
For me it is an escape. I used to call my dorm room the prison cell, but when I was doing something to do with Poetry, that prison cell became a haven, somewhere where I can just escape, without interference. And it’s the same when I’m in Wood Green, which is home, but not one of the best areas in London. Poetry lets my mind fly, and escape and that is something I relish. I have a passion for creating.

Do you have a memorable or favourite performance of your own?
My favourite performance has to be collaboration piece I did in Birmingham, with Uncle A.dot, not only was the organisation on point, but just the vibe we got from the crowd! I mean, for me Uncle A.Dot is genius and when I say the two of us together was mayhem trust!! “We Thank God”

What has been your biggest achievement thus far?
I think it would have to be, being featured in “The Voice” newspaper I mean I knew the feature was coming, but I wasn’t made clear in which issue, so it was like every week I was checking the newspaper. Then when I saw my face in the issue, my heart stopped. I don’t think it was the greatest achievement, but definitely one of the best feelings, considering I had just started out around that time.

Where do you want take your poetry?
I want to give it a “makeover”. I want to take poetry, out of the box that it is currently confined in. I want people to see on a mainstream level the kind of potential poetry has, raise awareness in the same way the Def Poetry Jam managed to do a couple years back. Like I tell everyone, my aim to is make poetry “cool”.

Where can we see you next?
Best thing would be to add me on facebook/twitter, and check out my website which is coming very soon God willing, to keep track of my performance dates. Preferably, next time you will see me is on my DVD cover though…lol.