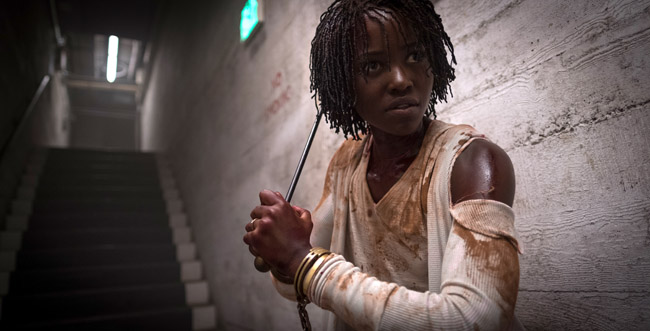 Freakishly fun but ultimately clunky and frightening, Lupita Nyong’o is a complete a badass.

After the stand-out success of Get Out, audiences have been waiting with bated breath to experience what else lies in Jordan Peele’s arsenal and his latest Us proves the actor turned director was not a one-hit wonder. A thinking person’s horror that doesn’t flow as smoothly as you would hope, Peele’s go to theme of body possession is in full swing at the hand of the freakish doppelganger which epitomises the state of current world climate.

Placing an eerie unbalance Peele opens with text that explains that across America lay’s underground bunkers, abandoned subways and some that existents or use are unknown. Paired with a zooming out shot of uncaged rabbits the uneasiness ensues. The action begins in 1986, a young girl enjoys the fruits of the Santa Cruz fun fair with her parents before wondering off, enticed by hall of mirrors which states ‘find yourself’. Like a rabbit caught in headlights, the young girl comes face to face with her own self-image and the nightmare begins.

Peele’s latest is one giant metaphor and homage to classic horror movies – especially Kubrick’s The Shining – that have come before. Mirroring the image of our society the focus is placed on the Wilson’s, a family headed up by Lupita Nyongo’s Adelaide as matriarch. Losing its opening momentum we cut to the Wilson family heading down to Santa Cruz for a family holiday but no sooner as the family arrive, their nightmare is unleashed as they are faced with a home invasion from their doubles donning red boiler suits and brandishing scissors with one mission in mind.

Apart from Adelaide (Nyong’o), there isn’t much to know about the Wilson family before we dive straight into the zombie-like attacks and the fierce fight for survival. With each actor playing both parts, Nyong’o proves she is a tremendous talent and pretty badass in both her roles. Normal Adelaide is twitchy and nervous with not much to say but dotes on her young family and moves like a gazelle thanks to her dance training. Her red boiler suited self is more rigid, almost robotic in her movements and monstrously gruff in speech she darts between spaces at the flash of an eye to take everyone by surprise with the stabby scissors.

Peele’s use of music only heightens the senses on certain scenes,  ‘I Got Five on It’ by Luniz seems to portray the family coming together, victorious, whilst others are used to add to the frenzied attacks of the doppelganger’s on the human race. He also uses his trademark humour to act as a brief reprise from the horror that constantly throws aim as the murderous counterparts vow to untether themselves.

Whilst the twist hurtles towards you in the closing scenes, certain actions and mannerisms make perfect sense but the turn of events doesn’t quite come as the surprise it’s intended as you would have guessed it just after the halfway mark. Blood spluttered it may be but Peele shows his worth twofold as a master of the psychological horror aficionado who is on to the path to greatness.

Us is out in cinemas March 22nd.