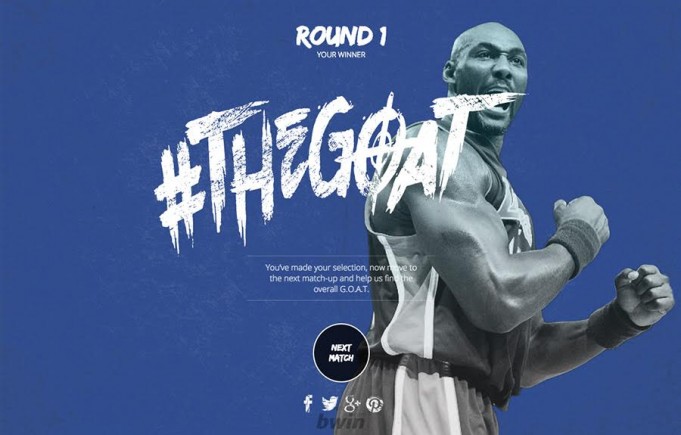 BWIN search for the fans’ most valued basketballer of all time. It’s a debate that has rumbled on for generations, but a new interactive poll is putting that to bed by allowing fans to vote in the NBA Face Off and help decide who the NBA’s Greatest Of All Time (G.O.A.T) is. The poll (www.nbafaceoff.com) will determine over six weeks who fans believe is the league’s all-time MVP, pitting 32 of the league’s biggest and best current and past talents against each other from throughout the NBA’s illustrious 69-year history.

Far from a forgone conclusion, it’s a battle which could finally see Michael Jordan go head-to-head with LeBron James, or Larry Bird stand shoulder-to-shoulder with the man described as the new Bird, Kevin Durant. The new breed versus the old. The legends versus the future Hall of Famers. Developed by online betting brand bwin, the poll brings players who are often overlooked to the fore, placing 32 top players in the voting process over five rounds and across six weeks.

Showcasing a variety of stats including points-per-game (PPG), assists-per-game (APG), and steals-per-game (SPG), it’s up to the fans whether a player should be judged on playing averages alone. Is a one franchise man is worth more than a journeyman? Does an NBA title outweigh a career average of 23 PPG? The NBA Face Off will reveal all.

The player match-ups are based on a seeding system that sorts by PPG, with top of the standings then facing bottom and so forth.

Players are prompted to continue through the match-ups, selecting their preferred players before being asked to join the debate on social media around #THEGOAT hashtag. Players with the most votes from match-ups will progress to the next round.

The overall winner will be revealed following a final head-to-head round between the finalists on July 28th.

So will Michael Jordan’s six NBA Championships be enough? Will 7’1” Wilt Chamberlain’s 11 Rebound Leader titles tower over the rest? It’s up to the 400 million basketball fans around the world to decide…