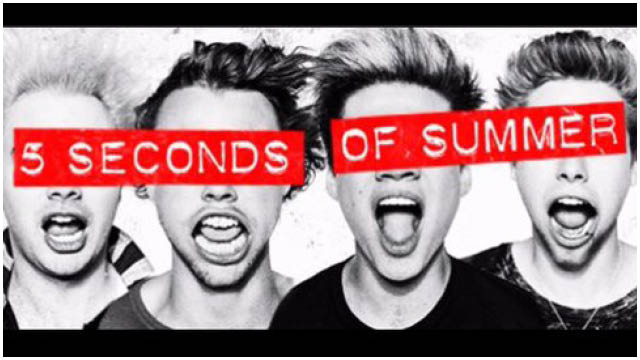 Jet Black Heart first took us by surprise back in August as it became available as a little taster of their sophomore album, Sounds Good, Feels Good, which is out now.

The song starts off slow and beat heavy, but within an instance warms into dark lyrics by vocalist Michael Clifford. The song begins with the lyrics “Everybody’s got their demons, even wide awake or dreaming” which quickly envelops the listener into the sheer amount of emotion that you witness within the song. The track swiftly develops and the layers of the vocals build as the climax of the chorus hits. It is more than fair to overwhelm Michael Clifford with his all-round efforts on this track, portraying nothing by raw talent from his powerful emotional run on a number of lines throughout “See a war I want to fight it, see a match I want to strike it” to his incredible skill on the guitar which pulps through your ear drums continuously, in a fashion so very similar to All Time Low’s “Edge of Tonight” (Nothing short of a compliment).

Raise your hand if you’ve ever been personally victimise by 5sos and their song releasing skills #jetblackheart pic.twitter.com/EKEnHedFyH

The song’s bridge projects an extremely mature perspective on the band, sung by vocalist and bass player Calum Hood, which quite simply features the track’s most uplifting lyrics, in the form of the lines, “The blood in my veins is made up of mistakes, let’s forget who we are and dive into the dark.” This only empathises the maturity which has been built within in the band, in terms of their song writing ability. However, we are not at all surprised to see that Calum was massively involved in the writing of this track, as in past 5 Seconds of Summer tracks we have picked up on his insane ability when blending deep and touching lyrics together. More than anything “Jet Black Heart” cements the Aussie lads, as nothing less than creditable and worthy artists, as both songwriters and musicians. And much to their delight, I’m sure, this track casts aside all thoughts of this band being another superficial “boy-band,” as the mainstream media loves to rope the guys into. Instead gives them the recognition for the band who they intend to be.

We are immensely happy that this will be the new single from the four-piece and cannot wait to see it sit comfortably at the top of the charts.

Release date of the single yet to be confirmed, keep your eyes peeled on the lads social media sites.