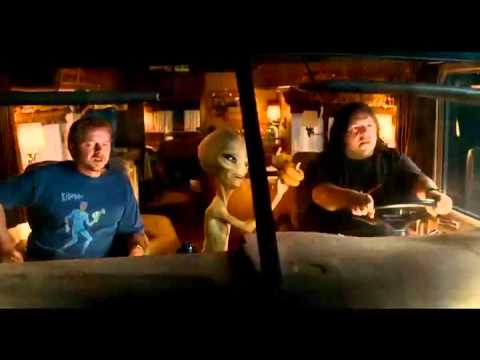 Comedy duo Simon Pegg and Nick Frost team up again in PAUL, an out of this world comedy crashing onto Blu-ray and DVD on June 13, just in time for Father’s Day! Click here to Pre-order yourself a copy now.

For the past 60 years, an alien named Paul (voiced by Seth Rogen; Superbad, Knocked Up) has been hanging out at a top-secret military base. When he discovers he’s been taken prisoner, the quick-witted, smart-ass alien decides to escape the compound and hop on the first vehicle out of town-a rented RV containing Earthlings Graeme Willy (Pegg) and Clive Gollings (Frost) who are on a pilgrimage to America’s UFO heartland. Chased by federal agents and the fanatical father of a young woman that they accidentally kidnap, Graeme and Clive hatch a fumbling escape plan to return Paul to his mother ship. As the two nerds struggle to help, one little green man might just take his fellow outcasts from misfits to intergalactic heroes.

Directed by Greg Mottola (Superbad), PAUL features a fantastic supporting cast including Jason Bateman (Up in the Air, Juno), Bill Hader (Forgetting Sarah Marshall, Superbad) and Kristian Wiig (Despicable Me, Knocked Up) and to celebrate the release we’re giving you the chance bag yourself a copy on blu-ray!

To be in with a chance of winning one of 3 copies of Paul simply answer the following question.

Which celebrity looks like an alien? We accept any answer. The one we find the funniest will win.

Send your answer along with your name, address and contact number to comps@flavourmag.co.uk