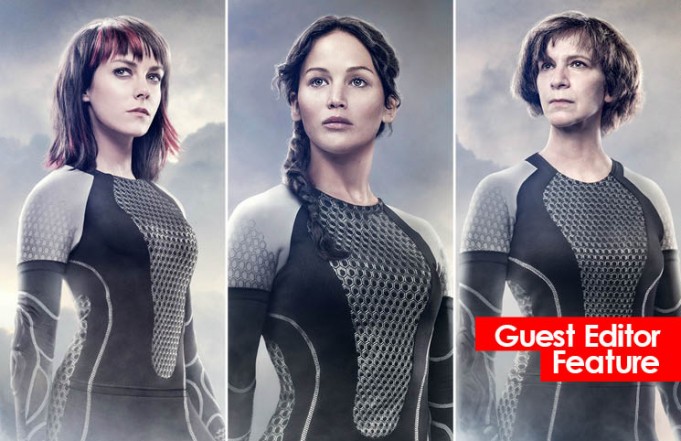 The Hunger Games is a science-fiction based trilogy of novels, which have also been converted into four films (two still yet to be released).

The basis of the trilogy is set in our world, however in a post-apocalyptic time frame. Summarised, the Capitol is the very cruel and ruling government of the twelve districts. All the citizens from districts four to twelve hate the Capitol down to the enforced poverty and violence that they suffer. The reason as to why the games were created, was more as punishment for a revolution which occurred in the past. One girl and one boy – aged between 12 and 18 – are chosen from each of the twelve districts to be put on live television and fight to death until one remains in order to entertain the individuals of the Capitol.

The main character, Katniss Everdeen (Jennifer Lawrence) first attracts attention when volunteering to fulfil the place of her younger sibling for District Twelve. Katniss then goes on to anger Snow, the ruler, when taking the love in which the male tribute, Peeta, has for her in order to gain affection from the Capitol. Furthermore, at the end of the Games, only Peeta and Katniss remain, so when they each refuse to kill the other. They come to an agreement to eat poisoned berries together so that there is no winner for the games or to represent. In response, rather than being humiliated in front of the districts, the Capitol allow the couple to win together. The other districts watching the Games have now witnessed an act of rebellion, which makes them lust more.

‘Catching Fire’ is about the development of the actions taken and the lead up to a new rebellion. Which its left very much on a cliff hanger building up to the BRAND NEW film out late November…

Within the storyline, the female characters are very well reflected and more in a non-stereotypical way. Which makes me question… Which Hunger Games girl are you? She is often quiet and is generally liked by the individuals in her community, mostly because of her ability to provide. Katniss is a very all-round skilful young lady. She is very much a family orientated women: a provider for her family and is one who will willingly step forward in order to protect her family out of love. A secretive individual who doesn’t like to give too much about herself away. She is incredibly perceptive, sarcastic and brash. She speaks her mind, regardless of the consequences, or who she hurts. As well as this, she is a very misunderstood character but deep down a good person. Wiress is not one to speak her mind, regardless of her intelligence. As well as never being able to finish her sentences, which leads her on to being referred to as ‘Nuts’. Furthermore, along with her intelligence, she is very quick at working out her surroundings and figuring out situations. Known for her kind hearted personality and well established judgements. For her age, Primrose is very mature and strong willed as an individual regardless of her state and surroundings. She is very prim and proper. Manners are extremely important to her as well as keeping an immaculate schedule, which must be kept to. On top of this, she bases her dress sense in order to fit in with the people she socialises with. Overall, a very well kept women who is consistently organised.

AMSTERDAM, The Netherlands and SANTA MONICA, CA (November 7, 2014) – Continuing the expansion of its global blockbuster Hunger Games franchise into new businesses, Lionsgate (NYSE: LGF), a premier next generation global content leader, is teaming with Dutch media company Imagine Nation and U.S. based Triangular Entertainment to bring The Hunger Games to the stage using innovative and immersive staging techniques, the companies announced today. The Hunger Games theatrical experience will launch in summer 2016 in a brand new purpose-built theatre in Wembley Park next to Wembley Stadium and Arena in London, UK.
​
The Hunger Games theatrical experience will be produced by award-winning Broadway producer Robin de Levita, co-founder of Imagine Nation, along with legendary UK promoter Harvey Goldsmith, Triangular Entertainment’s Warren Adams and Brandon Victor Dixon of WalkRunFly Productions and entertainment executives Robert Harris and R&R Media’s Gary Ricci.
​
De Levita has recently created groundbreaking presentation formats for two productions in Holland. Soldier of Orange, the hit Dutch musical, has been sold out since it opened four years ago. The audience sits in a 360-degree rotating auditorium that turns from set to set creating an unforgettable experience. ANNE, the first authorized play in 55 years based on The Diary of Anne Frank, uses rotating life sized stage sets. ANNE premiered in May 2014 in Amsterdam and has received rave reviews from around the globe.
​
“Robin de Levita and the entire production team are the perfect partners for extending The Hunger Games franchise into a live theatrical experience,” said Lionsgate Chief Marketing Officer Tim Palen. “Their creative genius, combined with world-class production values and state-of-the-art technology will provide a uniquely immersive experience for fans around the world.”
​
“I’m thrilled to be partnering with an innovative next generation studio like Lionsgate on a property that resonates so deeply with global audiences,” said De Levita. “The theatre is a fantastic medium to bring the many meaningful layers of Suzanne Collins’ writing to life.”
​
The first two installments of the global blockbuster Hunger Games franchise have already grossed more than $1.5 billion at the worldwide box office, and The Hunger Games: Catching Fire was the highest-grossing domestic box office release of 2013 and the 10th highest-grossing domestic release of all time. Suzanne Collins’ best-selling trilogy of books has already sold more than 80 million copies around the world and has spent six years on the New York Times list. The next installment of the franchise, The Hunger Games: Mockingjay – Part 1, will be released worldwide on November 21, directed by Francis Lawrence and starring Academy Award® winner Jennifer Lawrence, Josh Hutcherson, Liam Hemsworth and Woody Harrelson.