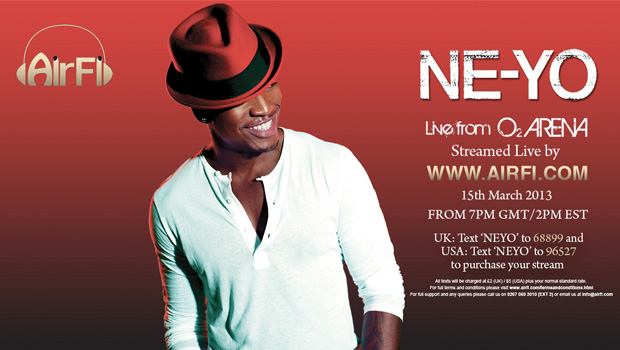 NEYO! Watch NEYO live from London’s 02 Arena, with support with UK’s TULISA and CONOR MAYNARD on the 15th March

Following in the steps of fellow stars Dawn Richard and Trey Songz, R&B superstar NE-YO will utilize new social networking website Airfi to invite you to one of the best seats in the house at the London 02 Arena.

It was announced through a press release on Monday (March 11, 2013), that this Friday March 15, 2013, the singer-songwriter will perform his catalogue of hits during his last performance of his UK tour and EVERYONE is invited. Thanks to Airfi, you can experience the end of NE-YO’s tour with this up close and personal sold-out show, streamed LIVE via any Wi-Fi device, including mobile phones- Text 68899 for the UK and 96527 for the US.

For only £2, you will have access to performances by Ne-Yo as well as his protégé and breakout star Conor Maynard, and chart topping UK sensation Tulisa. After the concert, you are also invited to the after party at Indigo2. To join the 12,000 screaming fans, head over to www.airfi.com and register for free, or if you are an existing member, simply log in. After logging in, click on the Ne-yo banner at the top of the page to pay via WorldPay. The fun starts at 7PM GMT/2PM EST.