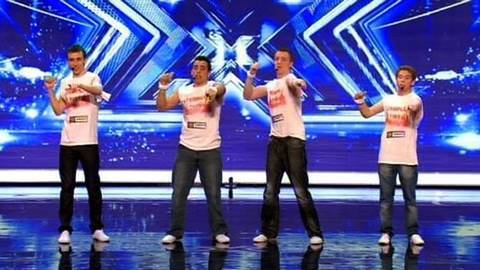 An incredible 12.6 million viewers tuned into last week’s first batch of eclectic auditions and this week, for the first time in four years the search began in Dublin, Louis Walsh’s haven. We also saw Katy Perry join the judging panel to fill in for Danni Minogue who was on maternity leave at the time of filming.

Up first to open the show this evening was boy group Temple Fire – with a name so gripping and powerful and a confident introduction even I foolishly expected greatness! And was so bitterly disappointed. Shame on you Louis – Simon blames you! One of the members was so cute and tiny he looked about 12! Their performance was hide-behind-the-hand embarrassing; cringe worthy to say the least, then just downright plain funny. After their audition Simon commented, ‘That was not serious was it?’ A group member replied ‘Yeah!’ ‘Simon ‘Oh give me a break!’ – Hilarious! Louis does however reassure us that it will get better for his home town.

My saving grace for Dublin was unemployed hairdresser Rebecca, who swapped hair dryers and straighteners for a shot at achieving her dream, and my goodness was it a worthwhile audition with an impressive version of Pixie Lott’s ‘Cry Me Out.’ She gained Simon’s first yes of the day after being continuously let down by acts not up to his expectations.

Meet Mary Byrne – Dublin’s best vocal talent, a 50 year old Tesco Till operator, who claims that when singing at work her cheeky co-workers tell her to jokingly shut up! Well they will certainly be eating their words watching her on the show, as now it is her time to shine. They are however very excited for her, and continue their support. She brought the audience to their feet in applause with a powerful Shirley Bassey’s ‘This is My Life’ performance – and secures her entry advancing straight into Boot Camp. Louis said ‘You picked a big, big song and you hit every single note. Tesco could be in trouble!’

So it was just onwards and upwards from there, back to England’s capital – London, we see 27 year old Painter Matt Cardie give some quirky yet brilliant vocals on Amy Winehouse’s song ‘I’m No Good,’ followed by boy band ‘The Reason’ displaying some note perfect harmonies singing Cheryl Coles hit ‘Fight For This Love.’ Friends – Scott, Glenn, Nathan and Mark told us ‘JLS came so close and they’ve done so well since coming second on X Factor. It’s about time a band wins. We’ve got the talent, the look and sound to win. We’ve tried to be brave and original and do material that the judges and the public aren’t going to expect.’ Go get it lads!

Saving the best till last is single mother Annastasia Baker, who comes back to share her improved vocals and mature attitude since falling apart at Boot Camp back in 2008. She begins by singing Tina Turner’s ‘Proud Mary’ which I adore so she had me clapping and singing along from moment go. Interrupted by Simon, who remarks ‘This is like one of these terrible Tina Turner tribute acts. I’ve seen trannies do better versions!’ Ouch Si. Miss Baker promptly chooses a second song – Adele’s ‘Make You Feel My Love’ and Louis is absolutely thrilled by the song choice! It was very controlled, emotional and heartfelt. Well done Anna, a one way ticket straight to Boot Camp.

Until next week my musical darlings!