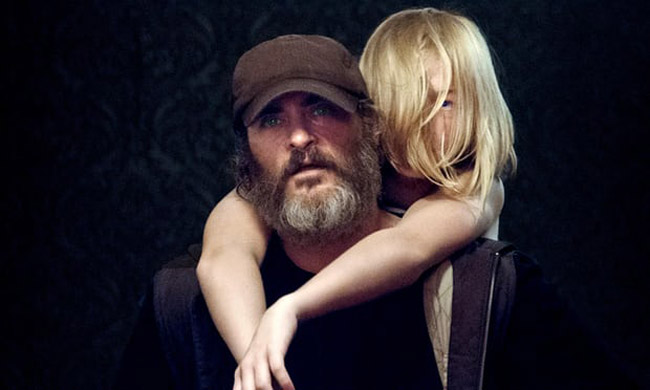 Since 2017’s Cannes film festival, acclaimed director Lynne Ramsey’s You Were Never Really Here has bounced off the lips of many a cinephile with riotous respect. It’s a psycho-drama that evokes the splendour of Martin Scorsese’ Taxi Driver with a broodingly paced plot, relying heavily on suggestion than any real brutality and an eerily haunting and atmospheric score from Radiohead’s Johnny Greenwood.

Joaquin Phoenix takes on the role of the burly “hired gun” Joe, — a retired war veteran with a disturbing past — a dishevelled looking man with an overgrown beard. He still lives with his mother, a woman he dearly cherishes and has all the hallmarks of someone who could just drop off the radar at any given moment; his calm viciousness screams of a person devoid of any real emotion. He is indifferent and clinical and evokes fear and can make the disappearance of any of his victims seem like they were “never really here”.

The story follows Joe, as he is hired to recapture a politician’s adolescent daughter (Ekaterina Samsonov) after she is abducted by a seedy and vile group of fellow politicians and high-powered businessman. Given the green light to achieve whatever is necessary to her captors to make them suffer, but as the story unfurls Joe finds himself getting a lot more than he bargained for as events take a dramatic and unseen turn as he is dragged further into doing the ethical thing to recover this girl.

Ramsey has established a battlefield of despair, hinting via flashbacks Joe’s own personal turmoil at the hands of an abusive father. The flashbacks popping up at random moments don’t always make sense but reveal the reasoning of Joe’s detached personality. The suggestion of violence and blood is twice as effective as actually witnessing a blood spluttered screen. It gives the plot more time to with intelligence in showcasing the character of its antihero. We begin recognizing his character as someone who executes what he does merely to survive and contribute for his mother, it’s the only skill he has but the outcome of his assignments don’t always sit well on his conscious.

Phoenix never disappoints and yet again he immerses himself into the role with passionate disconnection. Phoenix rises like the ashes from the flames as he leads the intensity as each scene unfolds and connects to the world around us, one in which is timely in the fact that the rich and powerful and their seedy and vile pass-times ruin the lives of those who they think have a duty to do whatever they please or get –off on.

You Were Never Really Here is out in Cinemas March 9th.