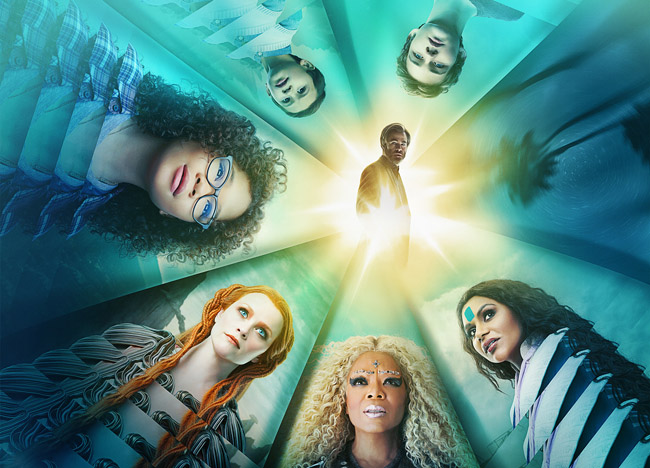 Ava DuVernay has been making waves in the cinematic universe since wowing audiences with her outstanding directional abilities since she graced us with the stirring Selma. Her next move was the powerful documentary on African American inmates, 13. Now crossing over the line from reality into a Disney fantasy world, DuVernay takes on the adaptation of Madeleine L’Engle’s A Wrinkle in Time with a visual power to blow the mind, but the story falls flat, transforming from the page to the big screen.

The story follows Meg (Storm Reid), a 13-year-old girl, four years after the disappearance of her scientist Father (Chris Pine). After starting as a vivacious intelligent girl, she is now filled with self-doubt and a lack of confidence in herself. She has become an outcast at school, the subject of bullying and an underachiever in her studies. The disappearance of her Father has struck her hard. Her baby brother and exceptionally gifted adolescent boy, Charles Wallace (Deric McCabe), dotes on his elder sister. Throw in a token boy (friend), Calvin (Levi Miller) and you have your team of mini adventurers.

When the weird yet mystical Mrs Whatsit (Reese Witherspoon) enters the fold to reveal that her Father is indeed still alive but stuck in another Universe the three children embark on a Journey. Partly accompanied by Mindy Kaling’s quote sprouting Mrs Who and Oprah Winfrey’s mothering Mrs Which, the three enter the vibrant world of Uriel to bring him home, but their rescue mission is thwarted when they realise they have an evil hurdle they need to jump over first.

DuVernay’s A Wrinkle in Time feels far from a finished film. At least two substantial plot points seem to have dropped out of this universe, the explanation of how Charles Wallace knew about the Mrs’s before their introduction. This is shortly followed by their arrival in Uriel, where nothing but a spectacular CGI show takes over and Witherspoon’s Mrs Who transforms into a flying leaf. At the flick of a switch, again without much explanation, the kids are venturing to the sinister side and going into battle.

Its core brilliance comes from its visual superiority, but it’s also its downfall. The splendour of the Mrs’s outrageously glorious costumes and bedazzling make-up are completely entrancing. Its vibrant colours are otherworldly, but the time the film spends on focusing on these elements hinders any urgency in the story, completely knocking the wind out of its sails.

There is a saving grace, and that is embedded in the story’s theme. It instructs its younger audience that your faults are not the enemy, and you should embrace them with open arms. No matter what others make you believe, you are worthy. It’s a crucial message to convey, especially to adolescent girls who are under pressure to adhere to the social norms rammed down their throats from a society that’s ruled by the superficial.

A Wrinkle in Time has a glimmer of a heart but has a massive hole in its universal soul, lacklustre performances and a weak plot with more holes than Swiss cheese spiral the film into mediocrity.

A Wrinkle in Time is out in cinemas March 23.