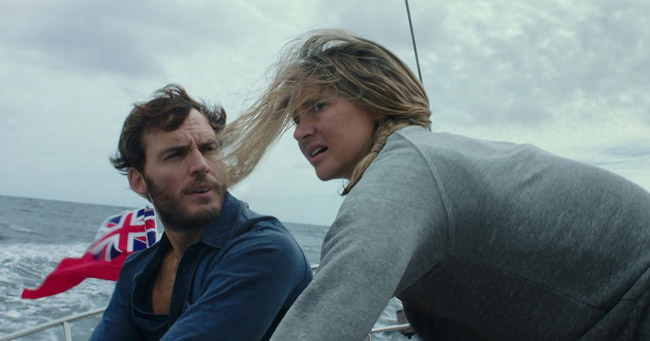 Director Baltasar Kormákur, better known for helming the action comedy 2 Guns, ventures into the depths of the deep blue sea with Adrift. The tragic true life story of free spirit Tami Oldham’s fight for survival adrift a shipwrecked boat for 41 days. No straightforward tale of survival, the film is a heartbreaking mish-mash tale of love and survival that doesn’t quite hit the high tide.

Adapted from Tami’s own book on her harrowing experience, Moana’s brothers (who wrote the screenplay) have created a clever montage; pairing Tami’s grit and determination to survive on the boat with her love story of sailing partner Richard Sharp. It’s an inspired idea to merge the two stories together; After all, observing one person on a boat for an extended period of time could have been just a tad mind-numbing.

The film starts in the middle, with a waking Tami, played by Shailene Woodley, on a shipwrecked boat after being directly hit by a catastrophic hurricane; Desperate to find her fiancé Richard Sharp, played by Sam Claflin. With Sharp, horrifically injured, it’s down to Tami to make sure the pair of them survives the rest of their trip from Tahiti to California.

Interlaced with the perils and terror, the film sways back and forth unravelling how the pair met and fell in love. With subsequent scenes informing the audience of how they found themselves in the predicament; they find themselves in when old friends of Sharp ask the pair to sail their yacht back to California. If it wasn’t for the flashback sequences building the broader picture, the relationship with the audience would have been non-existent; a couldn’t care less attitude regarding what happens to these two people could have been stronger. Kormákur’s delicately shot approach build’s substantial empathy, but it does render confusion as to what lane this story wants to full into.

Gut-wrenching tension is equally at the beating heart of the story. The vision of the impending storm as the boat heads into its very core is beyond question what nightmares are made off. Yes, the CG effects can come across a bit dicey, but the brute force of Mother Nature is felt with paralysing fear. As the film nears to its close, we learn we have been lead on a merry dance of deception. For those more weathered at spotting a twist early, you’ll probably spot this one coming but for anyone else willing to get lost in the story be prepared.

Shailene Woodley, who takes centre stage through every scene, is a tour de force and keeps adrift afloat. Her performance is dynamic and compelling and wholeheartedly convincing. Woodley pretty much leaves Claflin in the shade as his role becomes more of a run-off the mill forgettable bland character through no fault of his own.

Adrift is certainly a one-woman crewed voyage of grit and determination, one that frequently gets lost in its convoluted storyline. Obviously aimed at the YA demographic, it has its moments of slushy debatable dialogue but its efforts to remain tense and unquestionable watchable is commendable.

Adrift is out in cinemas June 29th.