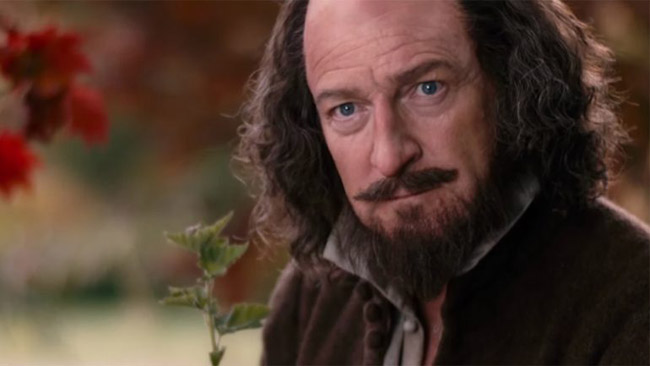 Engulfed in bitter sadness and sweet sentimentality which, at times, loses itself to overwhelming grief.

For anyone familiar with Ben Elton’s Upstart Crow, another of Elton’s dalliance with the Bard, William Shakespeare, although also written by him, All Is True is the opposite side of the theatrical spectrum. A sombre and touching affair that teeters between fact and fiction in the winter of Shakespeare’s life.

Directed by and starring Kenneth Branagh as the bard, it’s a story plucked from the imagination of Elton, whilst there isn’t a whole lot of information available in regards to Shakespeare’s life, the audience is slide into his retirement on a bed of silky sadness. Watching his beloved Globe theatre engulfed in flames, burnt to the ground he puts down the quill for good and retreats to Stratford to live out the rest of his days with a family that is more stranger than kin.

His retirement isn’t all rest, gardening and attending church. His return forces him to address his deeply buried grief at the loss of his son Hamnet some 17 years previous. The grief that revolves around the bitterness of his unmarried daughter Judith, the estrangement of his less than impressed wife Anne (Judi Dench) the troubled life of his other daughter Susanne and a suppressed family secret.

Taking its name from the working title of Shakespeare’s Henry VIII, All is True focuses on the Shakespeare’s rebuilding their home after the return of the Bard after many years. Dench’s Anne is a cold and stoic figure of a woman, this Husband before her looks like a broken man but he is a complete stranger to her, night after night she banishes him to their ‘other’ best bed. Judith, the twin of Hamnet, has major anger issues, mostly directed at her Father due to his absence and subsequent favouritism over her long-dead brother, whilst Susanne, unhappily married, brings a certain shame on the family. All of which bother’s Shakespeare but he lacks the passion to fight back all consumed in grief for the wonder son who would have followed in his footsteps.

The iconic Ian McKellen, although a small part – is twirling scene-stealer, playing the once pretty playboy now ageing fast Earl of Southampton. He sweeps in with grandeur putting Shakespeare’s biggest hater MP Sir Thomas Lucy (Alex McQueen) in his place. Sidestepping the acid-tongued MP for an intimate chat with William. Missing his presence in London he lavish’s the compliments until Shakespeare declares his lovelorn sonnets where inspired by him all those years ago, only for the Earl to coolly rebuttal his advances with Shakespeare’s own sonnet.

Bristling by candlelight, Branagh’s obsession with Shakespeare is engulfed in bitter sadness and sweet sentimentality which, at times, loses itself to overwhelming grief.

All Is True is out in cinemas February 8th