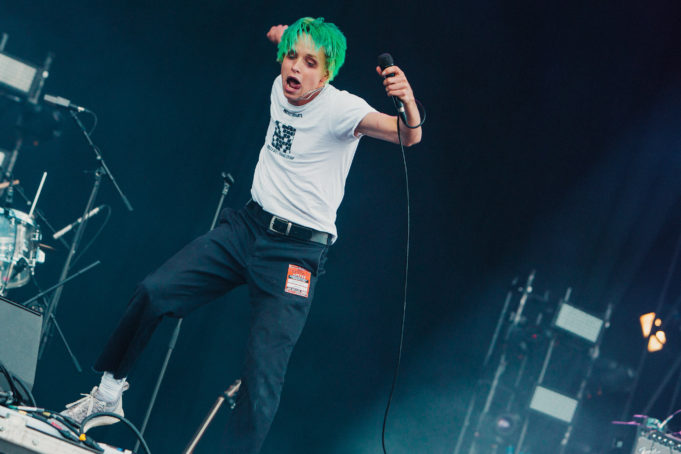 The American punk-rock band formed by members Cole Becker and Joey Armstrong a few years back, the guys created ‘Emily’s Amy’ which then turned into ‘SWMRS’. I chatted to the band about new music, embarrassing moments and more.

Earlier this year, you released your second album ‘Berkeley’s On Fire’.  What inspired it?

Joey – Boy Better Know, Reading Festival 2016! We were standing side stage and we watched how Skepta controlled the crowd and the energy he brought, calling the crowd “Energy Crew”. We pretty much took that and write Berkeley’s On Fire. We were like how can we make something rock ‘n’ roll and modern but Californian. That’s the surface of what the influence came from

Cole – I think because of ‘drive north’, we were able to play in front of so many people and different kinds of crowds so you really get to understand how music works and what people want to hear so I think out ears were pretty much turned back and that definitely inspired what we made

Since the release, what has the fan reaction been like? Is it what you expected?

Max – It’s been insane, exactly why we made the record and the crowd reaction, that community is what we wanted! We’re spoiled because it’s becoming the average performing to this type of crowd!

Joey- It’s so incredible for us, looking back and reflecting on how much our music has grown and playing a show like Community festival or Reading is like “yeah that was amazing but also like holy fuck! We’ve come a long way to be able to be here.

What’s your favourite track on the album and why?

Cole – Yeah that’s one of my favourites too

Seb – That and Trashbag Baby. It’s so great to perform it live.

You’re no strangers when it comes to performing at festivals, do you have any pre-show rituals?

Max – we kind of like start singing random shit and whoever starts one, the rest of the guys will sing that too and then someone will change it

We know shows don’t always go to plan, what has been your most embarrassing onstage moments?

Seb – I shit myself on stage once

Sophie – Wow! That’s something new… Did the crowd know?

Seb- No I’m joking but If I did, they wouldn’t know

Max – We’ve been playing live shows for a long time and at this point, we’ve learnt that if shows are going wrong it’s not embarrassing. We have to figure out a way to make no one realise

Joey- Yes the crowds are the kings and queens. The show must go on

Joey – my @ razer laptop for gaming

Cole – Year 3000 by Busted and not Jonas Brothers

Seb – Mine would be the friend’s theme song

What would be one thing people would be surprised to know about you?

Joey – That we don’t really party!

Joey – and explore! That’s the best thing about travelling