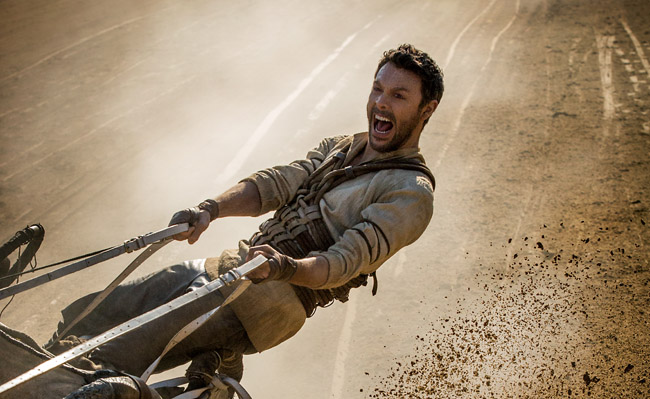 With an epic biblical classic such as Ben-Hur, which was originally a novel by Lew Wallace published in 1880, comes with it the desire to remake the hell out of it, from films to TV series and 2016 see’s yet another remake. One that excites all too rarely and is full of cringe-worthy moments to make the best of you feel uncomfortable.

At the helm of 2016’s Ben-Hur is director Timur Bekmambetov, the man behind films such as Abraham Lincoln: Vampire Hunter and Hardcore Henry but what he fails in is the lack of any real drama. A man that has many years of filmmaking experience under his belt seems to have lost any real skill which produces a lack of quality in production; its only saving grace is the CG action which makes this barely watchable but then it tries too hard to follow in the footsteps of films such as The Gladiator. Judah Ben-Hur (Jack Huston) is a prince of the Roman occupied Jerusalem; the family are wealthy and privileged and have  brought Judah up as a peace-loving man with nothing but respect for the Roman’s that have forced their ferocious ways in his land. Messala (Toby Kebbell) is his adopted brother, shunned by Judah’s mother and living with the shame his grandfather brought to his name. Wanting to make his own way in the world and not rely on the Ben-Hur wealth he leaves to join the Roman army.

However, three years later he returns, he seeks revenge on Judah for refusing to give up a zealot, who was under his protection, for an attempt to assassinate the Roman Pilate. Messala seeks his revenge and makes the whole family destitute, Judah sent to live life as a galley slave and so he thinks, His Mother and sister murdered, which means only one thing. He must seek revenge for this injustice.

There are a few tweaks in this re-imaging that were not present in Charlton Heston’s Oscar winning 1959 version, which includes the assassination attempt that leads to the family’s arrest, this leads to the question why mess with something that worked previously? A resplendent sight to behold is the appearance of Morgan Freeman as Shiek IIderim, heavily dreadlocked yet his dialogue is spurious.  The dubious cameo appearance of Jesus Christ popping up throughout seems misplaced and for the most embarrassingly awkward, even the character performances leave a lackluster taste to the senses. It’s only worthy scene is the fatally epic chariot race where things really start to heat up and get the heart racing.

Ben-Hur is out in cinemas September 2.