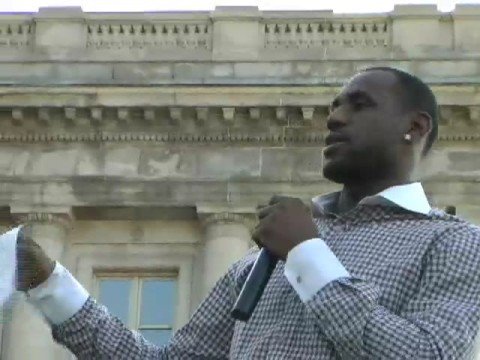 Hip Hop mogul Russell Simmons tells Annika Allen about bringing his comedy brand to the UK, losing his close friend Bernie Mac and what it’s like living the American Dream Russell Simmons has brought his legendary brand Def Comedy Jam to the UK. This groundbreaking comedy has been around for over a decade, starting on US channel HBO in 1991. Since its inception it has seen America’s black comedy elite grace its stage – with the likes of Chris Tucker, Dave Chappelle and Bernie Mac to Martin Lawrence. Most recently the UK’s very own Gina Yashere – now living in the US – took centre stage. But what has taken Def Comedy Jam so long to reach our shores? Russell explains. ‘Well we know you guys in the UK wanted it and we eventually found the right promoters to work with. It fit our schedules, it also fitted the comedians’ schedules – and so we made it happen.’

Working with Kojo
DJ Kid Capri has been the DJ for the show since its launch in the Nineties. He is essential to the brand and helped create the buzz as the comedians entered the stage and walked to the mic. The UK show featured dynamic US comics Tony Roberts, Dominique, Capone and Patrice O’Neal as well as former Flavour cover star and the UK’s favourite comic Kojo who hosted the show. ‘Kojo reminds me of Chris Tucker,’ states Russell. ‘He’s so funny and it was obvious to put that connection there – to have some of the British sense of humour on stage. I’ve been talking about Kojo for a while – I’m excited to be working with him.’
The entrepreneur is also keen to work with Kojo when he moves Stateside. ‘He’s on fire, so we’re
definitely going to work on some projects together.’ He’s also keen on bringing the Def Comedy brand to the UK on a regular basis. ‘As long as there’s new talent to expose, I think it will be a good thing.’

Over the years, Russell has experienced the launch of careers of many talented comedians including Bernie Mac who sadly passed away last month. ‘I was at home working on my computer reading Globalgrind.com – an online information centre for hip-hop heads – and the news of Bernie Mac’s death came up a couple of seconds after it happened,’ Russell remembers. ‘I have many fond memories of him. One time I remember early on in his career, he had a bad experience on stage. It was his first time on a national platform and he was booed off and his first response was: ‘I ain’t scared of you mother*******.’ That became his calling card and I was there when he coined that phrase. He had great creativity and expression and I saw it develop. He was the funniest guy all around. A great giver, a great person.’

Running Phat farm
Russell, who also created the clothing line Phat Farm continues saying: ‘My designers design stuff and when we find something like a little hood, we say that’s a Bernie Mac sweater. We liked him a lot. We’re going to miss him,’ he says laughing at the memory.

From his humble beginning in Queens, New York, Russell has come a long way. ‘Every day I’m grateful for all my successes. I didn’t know what was going to come from everything I was doing. The idea was to give what I had and to keep on giving, so I’m thrilled to be where I am – but I didn’t expect to reach here.’
He is clearly living the America dream but in his New York Times best selling book Do You! Russell talks about a time when mainstream America thought that black people could never live that dream. ‘The American Dream is black. Barack Obama is the American Dream. Urban clothing companies like RocaWear, Sean Jean and Phat Farm represent the coming of age of the American Dream.’

Despite his involvement in numerous hip-hop projects and his links with TV, film, music and fashion, what Russell is most proud of is his charity work. As a committed philanthropist, Russell heads Rush Philanthropic, which exposes disadvantaged youth to the arts. He’s a Goodwill Ambassador of CISRI-ISP enabling the organisation to ‘launch an awareness campaign using hip hop as a vehicle to address war, poverty and HIV/AIDS, as well as serving as the Chairman of the Foundation for Ethnic Understanding, which is dedicated to bringing religions and ethnicities together. ‘I love the charity work and the semi-political initiatives I’m involved in. The fact that black people in the world are poor is a concern for me.’