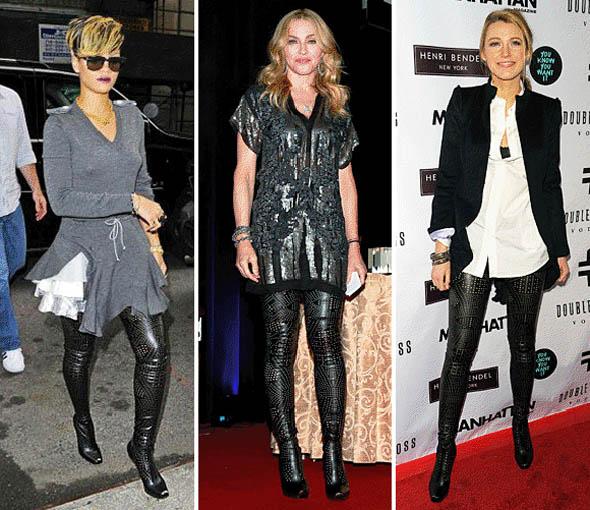 Jennifer Lopez & Fan Bing Bing
Peachy shades are the colour du jour for the American Idol judge and the Asian superstar actress. La Lopez keeps her Elie Saab look simple, while Fan pairs hers with a bedazzled turban, matching cardigan and gold bling. Which star has this look wrapped up? Kate Beckinsale & Céline Dion
It’s a sequins ‘n’ skin showdown as the actress and the singer square off in this glitzy Balmain gown with thigh-high slit. Bee Shaffer & Halle Berry
Nina Ricci’s corset dress is getting a lot of action—from an outing at last year’s Met Gala Costume Ball to this year’s Golden Globes. But who wears it best? Vanessa Williams, Khloé Kardashian Odom, Mary J. Blige
Alexander McQueen remains as relevant as ever—with this strapless chiffon dress appearing on all three ladies in 2009, 2011 and 2007, respectively. But who really stands out? Madonna, Rihanna & Blake Lively
It’s a battle of the boots as the stars square off in Stella McCartney’s sky-high thigh-highs.