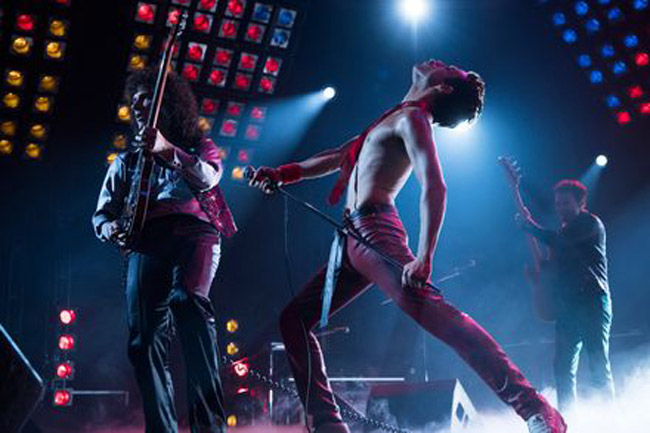 Marred by creative differences and challenges, Bryan Singer’s Bohemian Rhapsody has taken a few knocks to its iconic status. More a respectful nod to the Queen frontman, Freddie Mercury, than a band biopic, the anthem epic soaring renditions and the frivolous birth of iconic songs play out like a playful puppy than hard-hitting, in-depth drama. This one is unashamedly for the fans and quite frankly, is all the better for it.

The movie is focused on the early days of the band, leading up to the biggest moment in music history and the heroic performance from the band at Live Aid in 1985. The larger than life Mercury is played by Rami Malek who emboldens not only every inch of Mercury’s flamboyant charm and charisma but his delicate vulnerable side fans very rarely saw with every inch of his soul.

We bounce through the band’s history with fleeting glee from the moment Mercury joins Brian May (Gwilym Lee), John Deacon (Joseph Mazzello) and Roger Taylor (Ben Hardy) in a back alley boozer. Before we know it, the band Smile have changed their name to Queen, jumped straight into the studio and gone from playing small gigs at pubs to filling out arena’s, topped off with throwing there dummy’s out the pram when made to lip-synch for the BBC’s Top of the Pop’s. It spends no time in building the scenic history but dives head first into superstardom. Not only does this ensure that the 2 and a bit hours are filled with momentous pleasure but it contributes to keeping everyone pretty much engaged.

With all the pomp, glamour and band bust-ups over creative differences comes a darker side of Mercury’s life. While never going too deep we see themes of Mercury’s relationship with his Family or to be more precise his Father. His undeniable life-long love for his ex-fiancé Mary Austin (Lucy Boynton), who always pops up when he needs her, although prominent his sexuality takes a backseat. Although set in a time where homosexuality was still seen as a dirty word and even dirtier act, it was papered over as just a matter of fact. The defining theme, however, was how fame and fortune became a lonely space for Mercury.

Influenced by the spotlight, drugs, an ostentatious lifestyle and hangers-on that had too much influence over the easily lead Mercury’s actions, Mercury spirals into a world of loneliness and self-imposed exile from those he loved and called family tugging on the emotional gland for a brief moment. However, those moments are short-lived. For its encore scene, it delivers a spectacular piece of mimicry. A 20-minute rendition of Queen’s most famous songs on the looming Wembley stage blisters the joy with sweeping camera angles to capture what would have been Mercury’s finest performance in front of millions of adoring fans.

Rami Malek is with no doubt the star of this show, at times it’s hard to differentiate between the actor and the man himself. This will be his crowning glory, if he doesn’t take an award spot it will be a heinous crime. Every other character are just bit parts in this Freddie Mercury extravagant show.

More bubblegum pop than gritty heartbreaking drama, Bohemian Rhapsody may have a few flaws but it is, without a doubt, made for its hardcore fan base. It’s engaging, foot-tapping and one all-around rocking respectful party. ROCK ON!

Bohemian Rhapsody is out now.