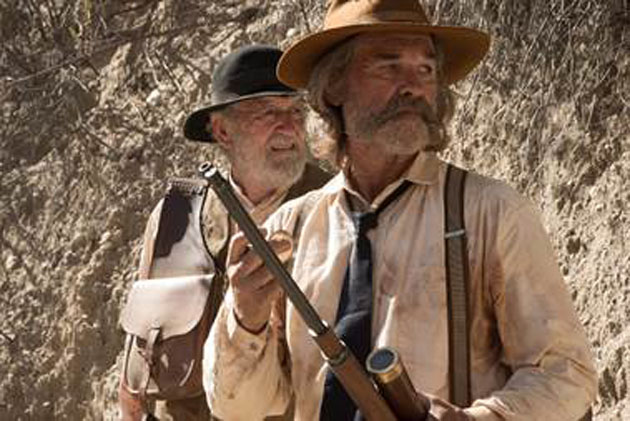 Bone Tomahawk is certainly unique, on paper, a story set in the old west with a horror twist really shouldn’t work but you’ll find yourself sucked in by its deeply narrative script and dark comedy. You may go into this film expecting one thing only to come out stunned – in a good way.

Bone Tomahawk see’s four men – Sheriff Hunt (Kurt Russell) a no-nonsense tough talking, man with a sense of compassion, His ever-loyal and aging Deputy Chicory (Richard Jenkins), Brooder (Matthew Fox), a vain gunslinger and Arthur O’Dwyer (Patrick Wilson) – from a small town saddle up their horses on a mission to save O’Dwyer’s wife and he real deputy sheriff from an unknown gang of inhuman beings. As the majority of the film is character driven there are long periods of the film where nothing really happens – we follow the four men as they struggle through the harsh terrain of the Wild West, at night leaving their fate in the hands of the elements and the cut-throat thieves that wonder the night to ambush and steal? However, these periods are sewn together with a dark comedy that is delivered flawlessly with deadpan performances that will have you chuckling away into your popcorn.  Most of these lines are delivered brilliantly by Richard Jenkins, who plays Deputy Sheriff Chicory, a not so clever old man who loves to ramble and has a confused look on the world he lives in. In an argument with Brooder (Fox), Brooder states the group of men are not intelligent as he states all the men are married and he isn’t making him intelligent. The silence and expression on Jenkins’ face says it all.

This all may seem quite boring but it’s strangely compelling to watch, plus the fact that within the opening scene we are subjected to wince-inducing violence delivered with a menacing and irritating character coming in the form of David Arquette.  We are kept on tender hooks as to what may happen next. One thing first-time director and novelist S. Craig Sahler creates is the constant expectation that something sinister lurks just around the corner.

The real horror doesn’t arrive until the final stages of this overly long film, but we are subjected to gore and pain along the way which acts as a constant reminder that this is no normal hybrid film. If you possess a tenderer disposition you may find yourself wanting to hurl as the violence goes from zero to off the radar, satisfying the need for many gore seeking fans.

Whilst the star-studded cast all give solid performances and Russell is supposed to be the star of the show its Jenkins whose light shines the brightest with the best lines and at times his unrecognisable character. The only person who doesn’t make any real impact is Matthew Fox.

Bone Tomahawk is out in UK Cinemas 19th February