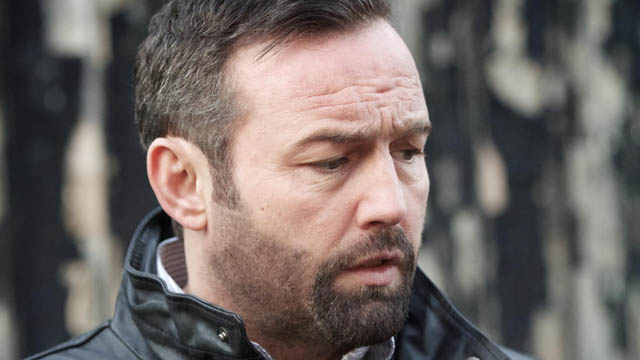 With the release of one of the best British films of the year, Montana, in cinema’s in December we could not turn down the opportunity to talk to one of the stars. Actor, Brad Moore (who plays the vile copper, Phelps) kindly sat down with us to tell us all about the film and his late start in life into the wonderful world of acting.

Firstly, let me congratulate you on the film Montana, I’ve seen it twice now and I do have to say it is one of the Best British films of 2014. Tell us a bit about the film and exactly how you got involved with the project.

Mo contacted me because he had seen me in a short film. I had performed in over 20, but had no real feature film experience or TV at that stage, as I was only a couple of years into my acting (I started at 40!!).  I was still a relative rookie, but he believed in me and that gave me the confidence to step up to the plate on set. When we met we clicked immediately. I read the script and the early drafts were very raw and unpolished, however, I was instantly drawn to the universe the story is set in and agreed to champion the film with Mo. If you think Karate Kid or Leon the Professional, but set against the backdrop of a London council estate then you have Montana.

You play a cocky bent copper in Montana, How easy is it to play these kind of parts? Where do you pull your inspiration from?

Phelps was a degenerate, selfish, racist, a nasty piece of work and all the more interesting because of it! He represented the black comedy in the film, so was also a great character to play.  During my preparation for the character Mo Ali and I spent several days on the streets were we shot the film in London’s east end. I was improvising in character and would spend 20/30 minutes in character and started to practice simply sneering at life as Phelps does in the film. Although Phelps is not completely unhinged (he actually quiet cunning and methodical), he is violent so I would walk in to a newsagents to buy a coke and think about punching the guy behind the counter on the nose for no reason! Of course I didn’t punch any one, but it helped to tap into this violent thought process when we came to shoot.   What I also found in preparing for the role was that it was very difficult to find anyone from the Met that would admit to being similar to my character! So I couldn’t really anchor the character with any real life examples. Instead, I looked more towards villains because really, at the core of his nature he is a villain.

I am really lucky to have found acting, as each character brings a fresh challenge and a new opportunity to live out a fantasy.

You worked alongside the likes of Adam Deacon, Ashley Walters and Larrs Mikklesen in Montana, can you tell us what it was like to work with such talented actors?

Adam and Ashley were very warm and welcoming and fun guys to have on set. I must have spent something like 12 hours in a Range Rover with them on a shoot day, so you couldn’t help but get to know each other a little bit. They’ve worked together on past projects so there was an existing chemistry between them. They’re both very successful so you might think that there might be a clique-y element to them, but this wasn’t the case.

Michelle on the other hand, I initially thought that she didn’t like me as she was always aloof and distant. By the second day I twigged what she was doing, in the film our characters don’t like each other so she wanted to maintain that so that it fed into our relationship on screen. After we’d wrapped shooting on her last day on set, she became much friendly and we got on well.

You only started acting 5 years ago at the age of 40, previously you worked in the finance world, why the sudden change of direction in your career? Why acting?

I always struggle to explain this as it’s quite crazy, basically, I’ve always been in awe of actors and comedians but I guess never really brave enough to give it a go until recently. I came from a very working class family based in the rougher parts of London.  I loved films all my life, like a lot of people do, and when I was around ten I lived next door to an actress called Pauline Quirk, from Birds of Feather.  We used to play acting games together on the Street outside our flats in Stamford Hill, but I didn’t do anything from ten to 40, so I had 30 years where I didn’t act at all. I don’t come from an artistic roots or anything like that.

As all parents do I started telling stories to my son, in bed, and started doing the characters and doing voices, and started enjoying the performance of it all!!  I thought I love this so much and I’ve loved film and comedy all my life, so I have to do it. It’s sort of a mid-life crisis, really. Some people go out and buy a Harley Davidson, but I went into acting.

Not only are you an actor but you seem to be multi-talented, you’re a producer and comedian as well and In August 2014 saw Channel 4 feature your show at the Edinburgh Fringe Festival. Which out of the three do you enjoy most/Get most joy out of?

I did stand up for 2 years, really as a box tick, but also because I did not go to drama school and I wanted to challenge myself in terms of performance.  I have always been in awe of stand up comics and their bravery, so I decided to go on the stand up circuit and did it for two years up and down the country.  After my career as a comic, I was cast in and shot over 20 short films.  I got by as a stand up comic, but I thrive more as an actor.  After the short films, bigger parts started coming my way, so I decided to focus more on the acting.  I do not produce anymore, but I have a production company Moli Films Entertainment and a tremendous team of producers who run the business for me.

From doing my research I’ve found out you’ve been a bit of a globe trotter, what took you on your travels?

When I was 20 my parents divorced, one went to live in France and the other in Thailand, it was visiting them that really gave me the travel bug and led me to live in several different countries.  I had businesses and jobs in these countries, but always struggled to find something that felt right. I am really lucky to have found acting, as each character brings a fresh challenge and a new opportunity to live out a fantasy.

2015 see’s you in your first lead role as a merciless villain in Steven Nesbit’s British thriller Long Time Coming – North v South. I can imagine this was an extremely proud moment landing this role. Tell us about the film and how you managed to land the lead.

I met Steve Nesbit at the Teenage Cancer Trust charity event, we had a few drinks and knowing he was a film director, I started showing off by improvising several different psycho gangsters for him.  We had a lot of fun and a fantastic evening, about 7 weeks later he sent me the script for Long Time Coming and asked me to read it, with the lead role of Gary Little in mind.  It was only a year later when we were on set shooting the film that he had told me that my improvisations had inspired the script.  To say I was flattered and honoured is an understatement, Steve is an enormous talent and I am hundred per cent sure you will be watching a lot more of his films in the future.

Your career seems to be thriving right now, what does Brad Moore have in store for 2015?

Montana is in cinemas on the 12th December and then out on DVD in January. The gangster crime thriller Long Time Coming, will be released some time next year and I have just finished five weeks shooting a horror film called Writers Retreat with a tremendous ensemble cast and the talented Brazilian director Diego Rocha.

MONATANA IS OUT NOW IN SELECTED CINEMA’S AND DUE FOR A DVD RELEASE IN JANUARY.