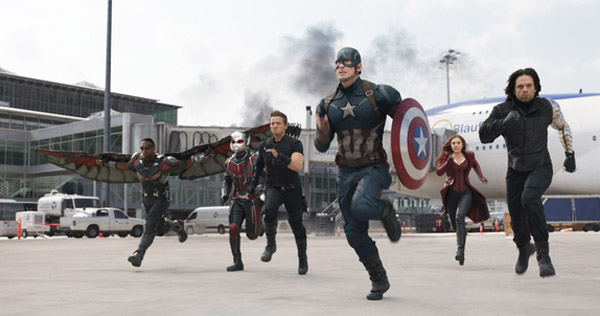 The film that has been dubbed the “best” Marvel film yet, Captain America: Civil War has once again taken the top spot at the UK box office beating out newcomer Bad Neighbours 2. Predicted to take £5.1 million this weekend the film has now made over £27.6 million at the UK box office which, after just 9 days, has surpassed the lifetime ultimate box offices of all the Captain America and Thor films along with Iron Man and Iron Man 2.

Captain America: Civil War also opened this weekend at number one in the US taking $181.7 million. The result is bigger than the opening of Batman vs Superman and Marvel’s Iron Man 3 making it the fifth biggest film opening of all time in the US.

In the UK Disney also looks set to take both the number one and two spots at the box office with The Jungle Book still holding strong. The film is set to surpass both Batman vs Superman and Deadpool this week to become the biggest film of 2016 in the UK.

“The Best Marvel Studios movie yet”

“Civil War is Marvel’s best film so far.  The cinematic superhero showdown you’ve been waiting for”