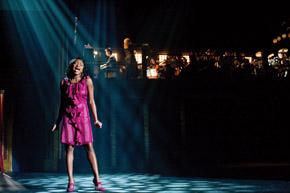 The 2009 production of Fame is not a remake – it’s a reinvention. Using the 1980’s Oscar winning classic as a template, it follows a new generation of hopefuls all training at a New York Performing Arts school. But as each work hard to achieve the dream, which of them will actually make it and more importantly, without losing who they are in the process.

The film stars ex-3LW singer-turned-actress Naturi Naughton, who plays one of the leading roles as pianist and singer Denise. The role marks Naturi’s second outing on the big screen after playing rapper Lil’ Kim in the Biggie Smalls biopic, Notorious. “Denise is a classical pianist who’s very sheltered and controlled by her parents. Now she’s trying to figure out who she is and what career path she wants to choose,” commented Naughton during a recent LA interview. “She realizes she has a passion for singing and other kinds of music…but to follow her dreams, she has to rebel and stand up for herself.”

The pint-sized singer is no stranger to music herself and began singing in the church choir when she was just five years old. Then at age 14 she went to an audition for a girl group and was subsequently signed to Sony Epic as part of 3LW – their first album going platinum. But Naturi was later to leave the group which then broke up a few months later, “when the group broke up, that was a huge setback. I didn’t want to perform anymore… It was hard to get past that, but eventually, I did.” She went on to play the role of Little Inez in the Broadway production of Hairspray and is looking forward to being part of the new Fame, “I’m just thrilled and fortunate that I got a chance to participate in so much of the music. It’s really like a dream come true for me. There’s a great amount of new songs that we’ve done…I’m also excited about the remix of the Fame song – it’s recognizable for the people who saw the original, but it’s definitely bringing a more modern edgy twist to it.” Also central to the story is the character Malik, played by is actor and model Collins Pennié. “Malik is the heart of the movie. He comes from a background of struggle, where he doesn’t have enough to succeed in life” describes Pennié. “His teacher discovers his talent and pushes him to open up because Malik has built up these walls from being hurt and going through so much in his life.” Pennié’s life hasn’t been that dissimilar to Malik’s and after spending half of his childhood in foster homes, Pennié moved out on his own at age 15 to try and make a better life for himself. “I was homeless for a little while and struggled to just follow my dream. I got through it by staying with friends and studying my craft on my own. I had to be resourceful, so I would go to libraries [and] the Broadway Dance Centre and audit classes as much as I could.”

However soon things took a turn for the better and the 23-year old was cast in a role in TV drama series Law and Order before being signed to Ford Modeling Agency where he became the face of the CK One fragrance campaign. Collins sees playing Malik as therapy and a chance to express some of his life experiences, “Malik’s story is similar my story, [so] I had to be willing and honest enough to put that in my work and not be guarded….It was weird acting something that was so close to home…but it wasn’t so much a challenge as an opportunity to be able to express myself. It’s not exactly my story. But it’s very close.”