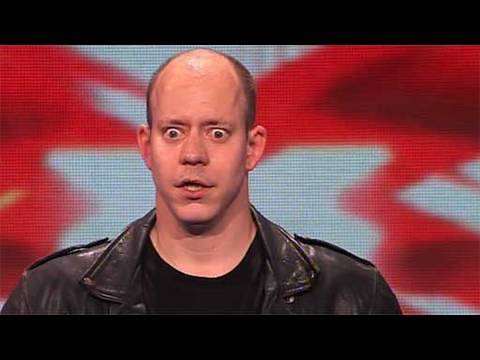 The first night of ITV’s weekend X-Factor extravaganza (marking the end of the auditions) kicked off with more fizzle than bang – is it just me or is the split of airtime dedicated to timewasters versus actual talent skewing more and more to the negative as the weeks go on?! Thankfully, there’s only a couple more shows worth of the pain left to endure, but it seemed as though Saturday night’s X-Factor was loaded with more misfits and jokers than we’re usually subjected to.

The show began with the audition of Richard Green, a 30-year-old security guard (and wishful heir to John Lennon) from Watford, who performed Cameo’s Word Up. Despite his lofty ambitions of saving the world, the genuinely likeable Green’s audition was pretty atrocious. To quote Simon: “the vocals were terrible, the dancing was awful… I just think you’re somebody who should be listening to music… I don’t think singing is for you.”

Predictably, a few more cringeworthy auditions followed before Chicagoan Ethan Boroian took to the stage, drawing a notable twinkle from the eyes of Cheryl Cole, clearly enamoured by the 19-year-old student’s good looks. He gave a decent but unspectacular performance of Use Somebody, his voice lacking the rawness required to really pull off the song, but nonetheless it was enough to secure four yeses. The ladies (and Louis) were clearly taken by the American, and he’s probably a good early tip to make it to the live stages.

Up next was surprise package Faye. I’m not going to lie, they SuBo’ed me with this girl – based on her appearance, current career (“I’m a teacher in a prison… one with men in”) and declaration of her ambition (“to be in Heat Magazine because I read it every single week”), I was expecting something spectacularly bad. It turned out that she had a fairly good voice, reasonable potential and enough to make it through to the next round.

Vocal powerhouse Tracy Cohen was up next and delivered an amazing audition that (shame on the X-Factor producers) we were only allowed a brief glimpse of. Big voice, I can’t wait to hear more of her. Harmony Hood’s tight take on Kanye West’s Love Lockdown was another tantalisingly short audition clip which suggested goods things to come. Great song choice too.

Mitcham-resident Natricia Thompson was next, with dreams of global stardom in America, Japan and China. Perhaps she’d be best advised to get a ticket to the Grammy-Awards and bumrush a Jonas Brothers speech because it’s quite possible her dulcet tones won’t be enough to get her the international fame she’s after.

A few more joke-auditions followed – a male model and an octogenarian (who wasn’t half-bad, and was given a second shot that will be aired on Sunday’s show) were the “highlights”. The next act to go through was scantily-clad girl group Kandy Rain – I wasn’t listening the first time I saw their audition, but when I hit the rewind button I was thoroughly unimpressed. No doubt the judges could see something that I couldn’t. Indie Okoye followed with a glimpse of a soulful rendition of Summertime and made it through, alongside the rather orange Stacey McClean from Blackpool. Failed former contestant Dominic Harris (who auditioned in 2007 at the age of just fifteen) performed With You – not the best audition of all time but to be fair his voice is probably at least as good as Chris Brown’s. Worth it just to hear Cheryl sound ridiculous saying the word “swagger”. The judges put him through, and I’ve got a feeling he might grow in this competition if he’s given the opportunity.

Nicole Lawrence made it through after being given a second chance by Simon. I’ll let you guys judge this one for yourselves, because I’m honestly not sure yet. I’m not convinced that she was that great, but the crowd reaction seems to suggest otherwise. We’ll have to wait and see.

The last act of note were couple Russell and Katie, also known as It Takes Two. Kate was pretty good, Russell not so much. The judges were split, and as a result, Simon gave them a second chance, it was emotional.

So that was Saturday. Recap of Sunday’s show soon to come.