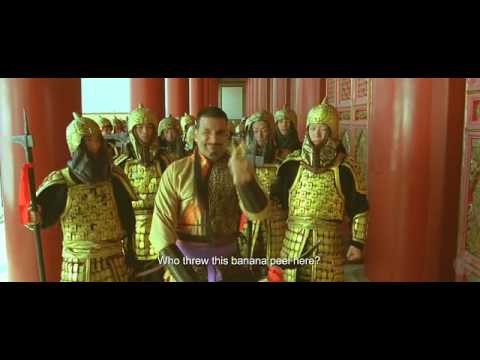 Bollywood, is one of the world’s largest film producers, with multi-million pound productions. However, the idea of sitting down to watch a five hour long Bollywood movie bursting with love-sick actors/actresses singing and dancing never really appealed to me. Lure me, on the other hand with a high octane Chinese martial arts film set in the Ming Dynasty and I will no doubt be in deep concentration right up until the final credits.Therefore, when I was presented with the foreign concept of watching and reviewing a Bollywood Kung-Fu comedy film, it was quite possible that things could go either way.

Two hours and twenty minutes of pure captivation later, it was plain to see that the infusion of the cultures of Asia’s biggest superpowers brought out the best in both worlds. From Hindi speaking Chinamen to Chinese speaking Indian men and then all translated through English subtitles, ‘Chandhi Chowk To China’ is Bollywood director Nikhil Advani’s answer to ‘Kung Fu Hustle’ meets ‘Kill Bill’.

The film follows the story of Sidhu (Akshay Kumar) who longs to escape his dreary existence as a road side chef in Chandhi Chowk, Delhi and instead realise his dreams of fame and fortune at the side of a fine woman. Seeking this life he naively looks to cheating astrologers, tarot readers and mystical magicians, believing in everything and anything except himself despite his father figures best efforts. His epic journey begins when two Chinese men mistake him for the reincarnation of Chinese war hero, Liu Sheng (Roger Yuan) presenting Sidhu with the opportunity to redeem himself and live a princely life in foreign lands. And so with the help of devious friend and translator Chopstick (Ranvir Shorey), Sidhu is encouraged to travel to China in order to save the helpless villagers from the all evil Hojo (Gordon Liu) and his reign of terror.

Joined by love interest Sakhi (Deepika Padukone) on his journey of love, revenge and self discovery, viewers are treated to a unique mixture of high adrenaline and often unbelievable (quite literally) martial arts, with tongue and cheek comedy, all set against a backdrop of some of the world’s most spectacular locations.

Warner Bros. Pictures first production ‘Chandhi Chowk to China’ is out in cinemas across the UK on Friday 17th January 2009.