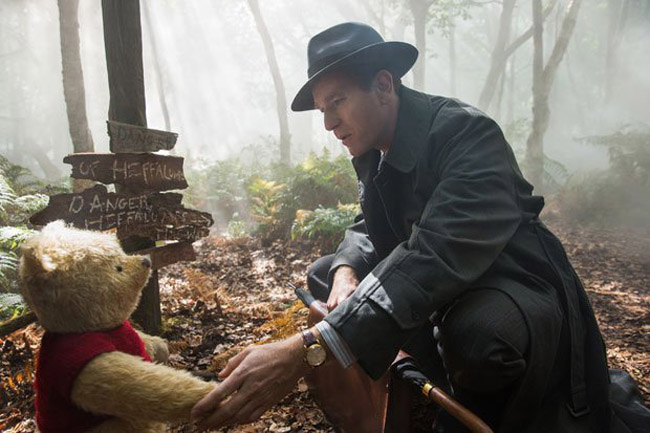 It’s not even a year since Goodbye Christopher Robin hit our screens and Disney has seen fit to transport us on another Winnie the Pooh adventure with Christopher Robin. Whilst the former focused on Pooh writer A.A. Milne, allowing us a unique glimpse of the man’s creative mind and brief relationship with his son; the latter ferries us on a charming yet mediocre visit of an adult Christopher Robin; a man who genuinely seems to have forgotten how to typically have fun and dream the impossible dream, something all of us adults need to sometimes take heed off.

The familiar story starts amongst the bright and cheery hundred acre woods; the CGI Pooh, Eeyore, Piglet, Rabbit, Owl, Kanga and innocent baby Roo are holding somewhat of a last supper for their hold human child friend Christopher Robin, who is about to leave his fantasy childhood behind after being packed off to boarding school. Christopher grows up via a flash forward of sequences; finally stopping when he returns from World War II in the form of the reliable and ever capable Ewan McGregor. Comfortably settled in London, Christopher promptly marries the elegantly graceful Evelyn (Hayley Atwell). Fathers an adorable child, Madeline and efficiently manages to hold down a rather boring desk job as an Efficiency Manager in a luggage company.

There is undoubtedly just one problem with this set-up, Christopher’s job has sucked the fun-loving life out of the husband and father his family increasing crave for. Having to stay in London to deal with an emergency work situation, he packs his family off to their little cottage in Sussex – which just happens to be A.A. Milne’s hub for the very creation of his successful series of books. In the meanwhile, Pooh (voiced by Jim Cummings) wakes up after a long slumber to find his friends missing; the woods transformed into some kind of grey and bleak looking hell before he stumbles through a tree portal and lands in London. Which just happens to be the very street garden opposite Christopher’s house and a chance meeting, to Pooh’s genuine delight with his childhood best friend.

In true stressed out fashion, Christopher requires a bit of time to warm up to the re-appearance of his furry friend, especially as the brainless bear manages to cover himself in honey and gets his sticky paws all over the house. The essential core of the story is one that will resonate most with the adult audiences who have been driven to the cinema with their kids during the holiday. A message that screams do not let work overtake your life and cut you off from your family. Remember what it was like to have fun as a child and fully embrace after all life is extremely short to sweat the small stuff.

Director Marc Forster has lumbered on the nostalgia delight with yearning tenderness and smothered it with delicious honey. The considerable detail that has gone carefully into our beloved CGI Pooh and friends is intricate and respectful to E.A Shepherd’s original illustrations. Even though Pooh may be of the story, it’s the old misery guts and pessimistic Eeyore that steals scene after scene with a gloomy one-liner or two to not only upstage his CGI friends but the humans too.

Beautifully shot, the story, however, lacks any remarkable originality. It doesn’t offer anything new and quite frankly, we have all seen this before. It will no doubt put a satisfied smile on your face and instantly make you long for that lost childhood but it doesn’t quite hit that Disney magic.

Christopher Robin is out in cinemas August 17