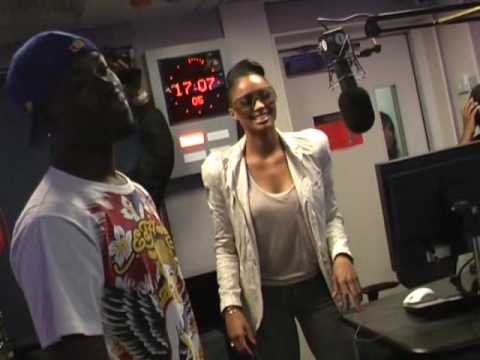 Ciara is know for her good looks, hot music and sexy dance moves. When the singer hit the UK recently to promote her latest single Love, Sex and Magic one of our very own stars in the funky scene Gracious ‘Nappa Man’ K joined C and Jam on 1Xtra to teach the American singer how to do his dance The Migrane Skank. Check out the footage below as well as hear Ciara talk about her favourite dancers of all time.

I like Michael Jackson cos he’s a well rounded entertainer. Thriller that particular video was what did it for me. It was very well choreographed and to me it’s one of the best videos of all time. I love the dance routine in the street, but I particularly liked the mini-movie in the beginning. It was crazy. I loved the shuffle-slide [she imitates the move and claps her hand]. It just made me wanna go and dance, I think everybody was doing the shoulder move and clapping. You can definitely see that he has his own personal style he seems like he’s having fun when he dances, and he has a very distinctive style.

And the moon walk was incredible that’s a move that people still try and do until this day. He set a trend by showing us that dance. As he’s gotten older obviously he can’t move the same as he used to when he was younger but Michael is a genius to me. He’s insurmountable and I do pray that everything goes well for him.

I think Usher’s an incredible artist and entertainer. Usher’s style is a combination of street; mixed with hip-hop he’s got a new style. I’ve seen him on [The Confessions] tour. It was an intense show very well put together and great vocals as well.

One thing I do know about him is he’s a perfectionist and you can tell when he performs. Striving for perfection is one of the best and most important things that would take you to the next level. You never know what move he’s going to do, he’s definitely grown and he’s shown. I don’t have one favourite video; I like You Remind Me, and My Way. I love that I thought he was so creative; actually You Make Me Wanna’s my favourite. When he steps out of the shoe’s that move was hot.

Janet’s is one of the only females that has done what she has done in the female aspect of what she does. That sounds weird but she can dance her butt off. I think the Velvet Rope Tour was incredible. I like all of her routines even in all her videos. She has Rhythm Nation, Control she had a lot of crazy routines. It’s hard to say which one she danced the best in, but if I have too I’d say Pleasure Principle. She was by herself flipping off a chair, and really utilised the chair when she was dancing. Her moves were very snappy, and high energy and sexy at the same time.

There’s another artist called Omarion, hands down he’s incredible too. He’s a street dancer at heart and can freestyle his butt off. In You Got Served he was good but I’ve seen Omarion outside of You’ve Got Served from hanging out, he’s absolutely awesome he’s a cool associate of mine, I met him through a friend and we all hung out. He’s always like dancing around when he’s partying and when he’s in a club and we did some thing s together on MTV and he was dancing.

I love his first video O. It’s a great record. They’re dancing smooth, you, he definitely has a street edge, is innovative and his dancing contains lots of energy. I think that he’s very distinctive. One of a kind.

I think J-Lo is a very great dancer. She can do the salsa, the merenge, she can do hip-hop, street, so she’s a very well rounded dancer and entertainer. I didn’t get to see a full show; I only get to see a lot of her stuff by video. I was at an awards show with her but I couldn’t get to see her but I like Get Right, I think that’s her best one.