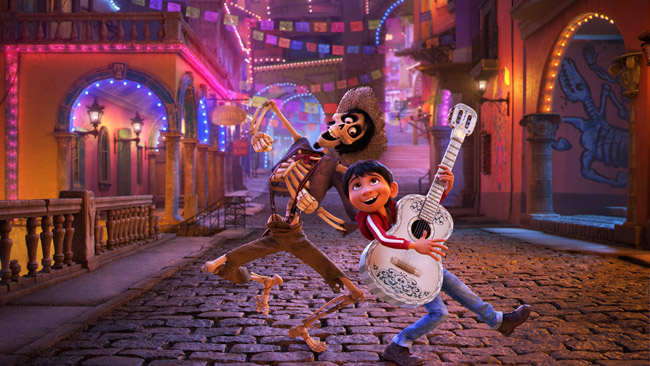 Disney team up yet again with Pixar for their latest cultural offering with a tremendous amount of heart and vibrancy. Director Lee Unkrich’s vision of spectacular colour embodies the Disney template spicing up the picture with humour, sprinkling with a melancholic learning experience of cultural traditions and grief and filling its very core with catchy musical tinklings – especially with a touching ditto called Remember Me which is a tribute to those who have passed – to smooth out the jagged edges.

Using only a Latino cast, Disney/Pixar have embraced diversity with open arms after their most recent offerings in Moana and Queen of Katwa. Coco focuses on the story of Miguel (Anthony Gonzalez) and his dream to be a musician against the blessing of his family. After running away, Miguel becomes stuck in the Land of the Dead on one of the important days of tradition in Mexico, The Day of the Dead. Miguel has a race against time to make it back to the land of the living, aided by new friend Héctor (Gael Garcia Bernal) all the while having to prove he has what it takes to be a musician.

It takes a while for the story to gather real momentum as a foundation for the story is built around Miguel’s family tree. We learn, by venturing back to the story of his great-great-grandmother, and how her husband left her to bring up her child alone after abandoning them to pursue his dream of making it as a musician. Over the generations, music has become a dirty word and banned from the Rivera household but music is still in their blood. The set-up is a flawless experience of originality that builds up a comforting relationship with the characters that go on to manifest themselves once Miguel crosses over to the land of the dead.

Coco’s exposition flourishes in the Land of the Dead dispelling any pre-conceptions the land of the dead is grey and gloomy. The neon colours vibrantly pop out of the screen to open up a world of magically spectacular views of buildings stacked up on each other. Roaming the ground, we witness skeletons and magical spirit animals that could frighten the youngest of audience members. The inhabitants of this world are made up of the dead who are still remembered by the living who (on the infamous Day of the Dead) leaves out a photograph so their loved ones can cross over into the world of the living. Those who are forgotten go on to experience a second death and disappear.

In the final hurdle of this affecting tale, make sure you have the tissues at the ready. Although the smile induced from the very beginning doesn’t fade the predictable twist and its following outcome is a strain at the heartstrings. Even those with a heart of stone will be broken into a blubbering mess. Sumptuously delightful, tenderly heartfelt with humour and culture, Coco is an emotional triumph.