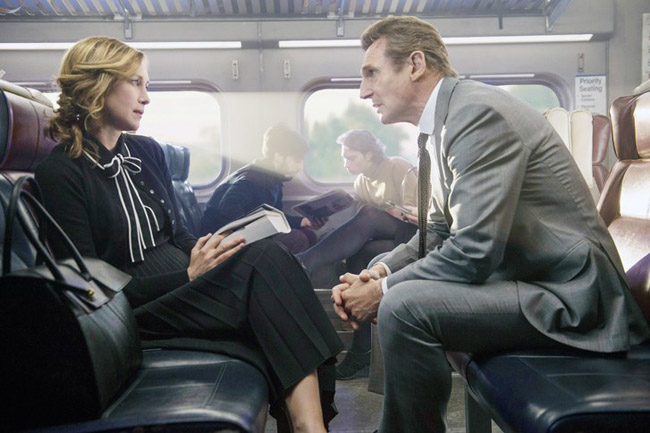 If there is one thing, you can guarantee from a Liam Neeson action thriller it’s the cliché plot and the predictability of its outcome hurtling at high speed throughout the storyline. Although The Commuter is a fun Friday night pleaser, it refuses to budge that gear stick as Neeson begins to make his final bow in a genre that has graced his career.

Neeson teams up yet again for his fourth collaboration with director Jaume Collet-Serra, in a surprisingly fun yet forgettable race against time. It’s filled with tongue in cheek references to Neeson being too old to keep doing the job he is carrying out, and enough plot holes to start its own black hole that is just itching to suck it into forever. The one blessing that comes out of this is that it never takes itself too seriously; if it had we could have been lumbered with a completely different movie.

Neeson plays Michael, a 60-year-old insurance salesman who used to be a police officer. On the surface, he seems to have the perfect home life in an opening sequence that could be mistaken for a scene in Groundhog Day. Except that groundhog day comes to an abrupt ending when Michael is laid off from his job. With the loss of his job comes the revelation that he has money issues that are slightly problematic.

On his routine train journey, Michael is approached by a strange woman (Vera Farmiga) with an offer he is in no position to refuse. Forced to search the train to uncover the identity of a passenger as his families lives are put at risk, Michael frantically wanders the carriages of the train trying to unravel the puzzle before they arrive at the last stop. As the pieces start to fit Michael realises he is a part of a plot which more corruptly sinister than he imagined.

Padded out with a cast of Sam Neill who tries to hoodwink the audience by leading assumptions down the wrong track and The Conjuring veterans Vera Farmiga and Patrick Wilson in roles that are far from otherworldly we hurtle through the narrative at breakneck speed as Neeson wrongly determines one subject after another and throwing in an expletive to an arrogant Goldman Sachs employee before reaching it’s highly questionable destination.

Thankfully, Neeson has some gunpowder in his arsenal. After one too many mindless action thriller’s that have no doubt been good to him over the years, we can finally laugh at his last call with mindless fun even if it offers up not much else.