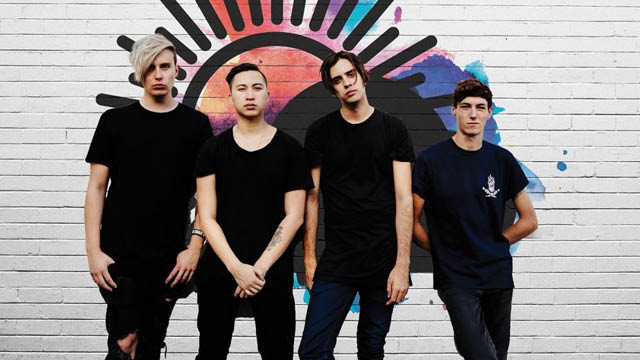 I sat down with Jayden from With Confidence backstage at the Kentish Town Forum. After pouring me a whisky and coke (which was lovely may I add) we got straight into the interview.

How did you all meet?

J- Josh and I went to school together and we were friends throughout school. When we finished school, we had a gap year and we didn’t really know what we were doing so we went to study music at college and we met Luke and Indigo there. We got really drunk one New Year and we said, “why don’t we just have a jam?”.  It went from jamming to writing songs.

So how is the tour going, what’s it like being on the road with Mayday Parade?

J- It’s been, sick man! We’re all pretty big Mayday fans. This album is pretty big for us, getting to hear it every night. It’s like one of the weirdest things, I’m like “wow that’s that band we used to listen too”.  It’s been really fun and the shows have been great! I can’t say anything bad about it at all.

You are good friends with 5 Seconds of Summer, did they give you any advice?

J- They gave us some advice here and there for sure. Our first show was with 5SOS before they were a big band. We still speak on occasions and sometimes we will ask them for advice on certain things but I think there is mutual respect because we’ve taken different paths in the music scene

You released Better Weather in 2016, are there any plans for another album?

J- Fuck yeah! We’re writing at the moment so it’s probably like 75% done and we’ve booked into record it at the end of this year! So hopefully it will be released early or mid-next year

What is your song-writing process like, do you all get involved?

J-Most of the writing is done by myself or Indigo will come up with the basic structure of the song and when we’re at band practice, one of us will play and then we just hash it out as a band. For us it’s the best way to go about song-writing

Who inspired you whilst growing up?

J-  I would say Blink 182 and I would also say the old school pop-punk.

Coming from Australia how do the shows compare to the ones in the U.K.?

J- It’s always a little different from place to place. UK and Australia don’t have a big difference actually. In Australia, people seem to know a lot of the older stuff. It’s not crazy like Japan as in between songs, it’s polite to clap and not say anything… so the crowd is super silent between songs, So when we first went over, it was very off-putting for all of us but we accept that it was out of respect.

What are your favourite songs to perform?

J- Well they all mean different things but for me singing new songs is really refreshing as it feels a little less stale from the songs we’ve been singing for a while now. I really do enjoy seeing Voldemort

J – Oh shit, I fell off stage when I was walking on the stage

You have done so much this year, what’s next for you guys

J- We’re doing a tour in the US which will be really sick and as I said at the end of the year we will be recording our new album.