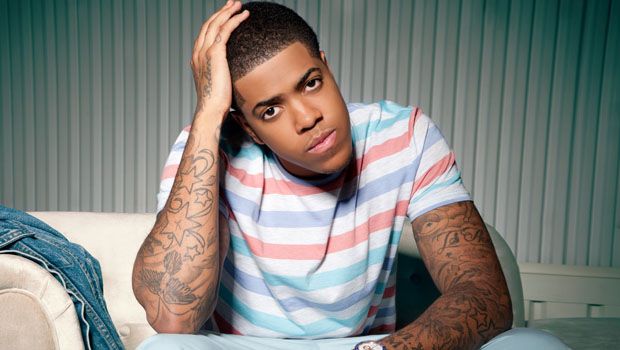 From Tottenham to Atlanta via two albums, five mixtapes and numerous chart-topping singles, UK rapper Chip has morphed from spitting in his youth club as a teenager to a prominent 21-year-old artist, working with some of the biggest names in the business: Chris Brown, Keri Hilson, Trey Songz… Now signed to hip-hop heavyweight TIs record label Grand Hustle, Britain’s latest export chats to Flavour Ed Annika Allen about how he plans to conquer America… With UK rappers Estelle and Tinie Tempah achieving huge success in the US, it was only a matter of time before another British rap talent took a chance on US stardom. Enter Chip. After parting with his previous label Sony, he had his eye firmly set on America.

‘I had major label propositions over here, but I don’t believe that A&Rs in the UK had a global vision for me, so me and my management team decided to take matters into our own hands, packed our bags and moved country! There were a few people in America interested in me and had a global vision. I met up with TI and we clicked. I’m very excited. He’s got the faith, he’s got the belief and the phone book; so now we’re rolling, man. Grand Hustle, Hustle Gang.’

It’s not only his label that’s changed. On January 13, 2012, he announced via Twitter that he was dropping the ‘munk’ and simply going by Chip. ‘I’m getting older, I always thought, how can I be 35 and still be called Chipmunk, knowing it was a bad nickname that stuck. I thought, I’m 21, new direction, new team, newish name.’ Fortunate normality
We’re having this conversation at south London’s ICandy Studios for our cover shoot, and despite having only arrived back in the UK from Atlanta two days earlier, and having partied the night before, Chip’s full of energy. He steps on-set to reggae blasts from the stereo. Chip begins to dance. Relaxed, his time in the southern state seems to have done him good.

‘I get normality in America,’ says the MC. ‘That’s something I haven’t been fortunate enough to have since the age of 16. If there’s a party, I’d be the main guy. So it’s cool to be able to walk around and take the odd picture here and there. I mean, I definitely appreciate my fans, but it’s nice to do some normal shit here and there.’

Creatively free
He’s also been busy recording his forthcoming mixtape London Boy, mixed by DJ Drama. ‘In order to get everybody’s attention in America you’ve gotta make a hot mixtape, so we sat down with TI and everyone to talk. It’s sounding really good. I’m proud of it. It’s the first time I’ve been absolutely creatively free since I was 16.’

“This time I feel free to say anything I like. Going for it, man!”

Chip’s quick to insist he never made any music he didn’t want to make. ‘I haven’t ever been forced to do anything. But you bear in mind who you’re making songs for. This time I feel free to say anything I like, working with who I like, producers I have never met before through Twitter. Just going for it, man. It will be very interesting to see what the mixtape does. I sometimes don’t feel it, but I know everyone’s watching. It’s a collective of globally respected artists coming to work with a British rapper on a mixtape. Not on an album, on a mixtape.

‘It’s good for up-and-coming rappers who aspire to work with people I’m working with to realise it is possible,’ he adds. ‘It doesn’t have to be via a major label. People need to understand how much of a big deal it is to be respected by artists globally. The biggest artist in Jamaica, Mavado, works with me. The biggest artists in America work with me. It’s all about creating the right infrastructure and movement at the time. And shout-out to DJ Drama who hosts the mixtape. DJ Drama is the mixtape king in America and only puts his name to the hottest mixtapes.’ Campaign crazy
Chip goes upstairs to the green room and returns with his MacBook so he can play the first single from the mixtape, ‘More Money More Gyal’. The track, which features Mavado, makes this Chip’s third time teaming up with the Jamaican superstar after 2010’s ‘Every Gyal’ and the ‘Starboy’ remix that also featured Sneakbo. The north Londoner gets excited when talking about who else he’s been working with. ‘I worked with TI; I’ve worked with Iggy Azalea. I haven’t worked with BOB yet, but we have been in the studio together.

‘Me and Meek Mill have a crazy record called ‘Pizza Boy’. I think that’s where my campaign is going to start in America, with that song. Wretch 32 is on the mixtape. I can give you a little exclusive and say Blade Brown is on the mixtape. So it’s just a good representation of bringing cultures together for music. I feel I’m the first British rapper to have the best collective of artists worldwide feature on a mixtape. So it’s quite an achievement.’

London Boy – titled after the name the Americans have given Chip – is set to be released in September. Until then he will continue recording and touring. So how does he know he’s made the right decision signing with TI? ‘I don’t think it’s possible to make a wrong decision; we learn from our mistakes so I don’t think it will ever be a wrong move. TI is a great guy. Just when I thought I wouldn’t meet someone in the industry that I could capture a mutual feeling with, there he was! He’s like my big brother now.’ What Chip thinks on…

Developing his career
‘No matter how big you think you are, there’s always someone bigger. I look at things like statistics; I look at facts and study the ins and outs more than I rap. Some people rap more than they think; I think more than I rap. So it’s like, I might read Forbes magazine and see P Diddy made, say, $300million off an alcohol bottle last year only. And yet he picks up the phone to me. So I must be doing something right. There must be a bigger reason as to why I was blessed with the gift of being able to put words together and I don’t think I’ve found that reason yet. So I have to keep going until I do. If there’s one thing I will be doing, it’s progress. I just wasn’t born to fail.’

Settling Down
‘I would say in theory I’ve lived beyond my years. But now I’ve been put in a situation where it’s a whole new beginning again. I don’t think there’s ever a point I could say I’m ready to settle down. I think you have to come across someone that will make you feel like you want to settle down. That person for me right now is music. There have been some girls I think are lovely. There are some girls I might love! You know I’m 21 and I’m not gonna pretend I’m some angel. I have fun.’

Fashion
‘Fashion means to me something it didn’t before. I actually now have a passion for it. I actually found myself googling pictures of clothes, and I stopped and thought, what am I doing? I’m a rapper! I had to do something about it. So I approached my god sister Ashley who has her own clothing company, LOUD. We just had a similar vision on where I wanted to go with the types of things I was doing and the type of clothes I wanted to wear. Working with stylists before, I used to just buy what I wanted to wear and wear it, whereas Ashley explained it doesn’t work like that and working together is always best. So now you might see me in clothes you probably wouldn’t have predicted me wearing.’