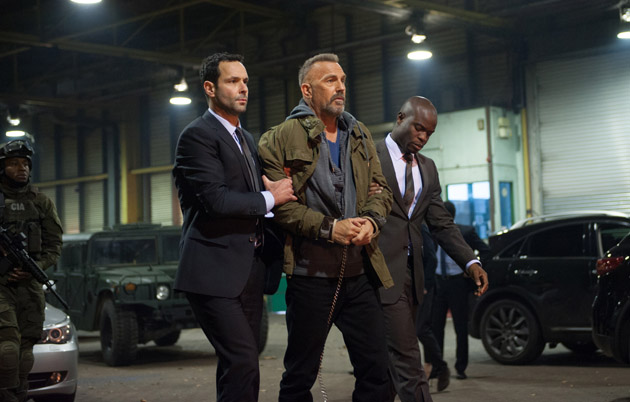 With an all-star ensemble cast led by Kevin Costner, Criminal takes us on a journey into the mind of a dead CIA agent placed inside the head of a mentally unstable criminal. The story may seem a little familiar and despite its lacklustre moments, it has the ability to entice, willing you not to look away.

CIA agent Bill Pope (Ryan Reynolds) is horrifically killed whilst on a top secret mission tracking down a highly important hacker known as The Dutchman (Michael Pitt). Why is he important? He just so happens to have stumbled upon the knowledge of taking control of the entire weaponry of the U.S.  Military command and his life as well as the world’s safety is at risk. Pope was the only person who knew the whereabouts of the hacker and without Pope, the world could very well be at risk. The highly strung and relentless CIA London Chief Quaker Wells (Gary Oldman) knowing that memory transfer is possible, even if it is experimental, recruits the pioneering neurosurgeon Dr. Franks (Tommy Lee Jones) who has to find the right candidate and conduct the surgery to transfer Pope’s memory into. Franks candidate is a disturbed criminal suffering from damage to his frontal lobes, which were obtained from a horrendous act when he was a child. A man who is prone to unpredictability and bouts of violence, and he is a man with evil running through his veins. Death Row convict, Jerico, played by an inspired Kevin Costner.

Director Ariel Vromen, who made his name with biographical crime thriller The Iceman, has taken a refreshing route with what can be described as a hybrid sci-fi, action espionage story. It shouldn’t really work but there is something about the psychological effects Jerico goes through that is beguiling, this could simply be from the performance Costner delivers. It’s not a role any of us is familiar seeing Costner in but proves his versatility as he plays two roles, good against evil, depicting a man who has never had to deal with feelings but all of a sudden has a whole set of emotions to get to grips with. After Dr. Franks conducts the memory transfer, it appears to have failed, with their guard down; Jerico manages to escape and starts to experience a life he had forgotten existed from the taste of a Kebab to stealing a van and driving across the London streets having his own little rave whilst listening to 1xtra. As the men realise the transfer hasn’t failed they end up chasing Jerico across town as Pope’s memories evoke Jerico to carry out actions involving not only saving The Dutchman but spending time with Popes wife, Jill (Gal Gadot) and their daughter, building an unmistakeable protective bond. That bond is tested when anarchist Xavier (Jordi Molla) kidnaps them in hope that Jerico will bring the Dutchman to him in order to control the U.S. nuclear weaponry for his own agenda. For a film classed as action, there certainly isn’t as much as you would think. It’s more of a thinking man’s action thriller. Yes, we do have a few explosions and some impressive fighting skills from Costner as he bulldozes through anyone who dares get in his way but at times, it loses the pace it tries hard to propel.

Criminal is out in UK Cinemas April 15.