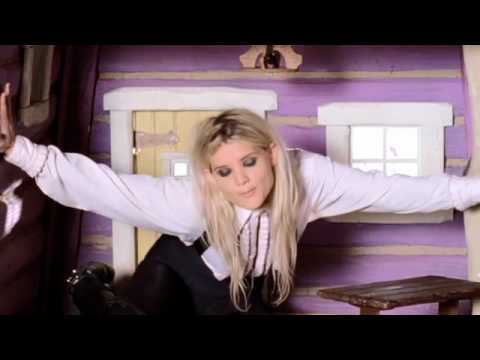 So you’re an average 16-year-old girl living on the outskirts of London, enjoying everyday life: GCSEs, fights with your sister, going to the park, signing to a major record label, collaborating with Chipmunk and so on. No big deal, right? Heavily influenced by decades of rock and pop, Daisy Dares You has a love for live gigs matched only by her hatred for the ‘blonde’ stereotype. Here she stands ready for the world with her trusty guitar. We catch up with the young singer/songwriter to find out why she’s been bossing her record label about…

You’ve been described as a ‘future pop sensation’, a ‘teen rock chick in pop clothing’ and just about every quirky pop description out there – but how would you describe yourself as a musician?
I would genuinely describe myself as… I dunno! I don’t like putting myself in any boxes. Kinda Courtney Love and Alison Mosshart, that’s where my influence is. I make pop music so people will put me in a box and compare me.

As you probably know, female singers aren’t exactly scarce. What do you feel you can bring to the table?
I think what people expect is something blonde and ditsy based on my appearance when it’s completely the opposite. Everyone seems to know what’s coming with the others. I’ve seen the package that some of them have released. I’ve really flipped it on its head because people expect to see something [ordinary], but in reality it’s a bit different which is a good thing to offer.

Your debut single Number 1 Enemy features Chipmunk. Are you excited about it?
Yeah, it’ll be good. It’ll be good to see how it’s received so yeah, I am! We’re gonna be going on tour together too and I really love playing live. I’m only playing music but it’s where I feel like I can be who I want to be and there’s no limits.

I’ve seen the video which looks cool. How does it feel being squashed by a giant cupcake?
[Laughs] It was quite heavy actually. It was resting on my hipbone and they kept shooting from different angles and I was like ‘Jesus Christ!’ In the video there’s only a couple of seconds of it but I was on the floor for about 35 minutes.

I hear you had quite a big say in how the video was made.
Completely. I’m not going to be told what to do. I’m quite strong-minded about what I want to do and I’m not going to let the label or anyone else tell me what to do. Because at the end of the day you still have to be yourself and everyone was cool with it. I’m glad I got given the opportunity to speak and express myself.

You have to promise me something.
What?

You have to promise me that Next Few Minutes will definitely make the album. It’s my favourite song so far.
I promise you that will be on the album. I co-wrote it with an American songwriter/producer called Matt and it means a lot to us so it’ll definitely be on there.

Give us a brief explanation of what it’s about.
The song mentions a certain ‘she’ who represents me… and basically it’s about the way I treated my ex-boyfriend. Not very nicely in case you were wondering. When I write I take stuff from both sides of the story and it’s a combination that seems to work.

You’re influenced by a lot of different artists like Karen O and Emily Haines as well as bands such as The Clash and Nirvana. Will we hear hints of them in the upcoming album?
Yeah. I mean, like I said I wrote [Next Few Minutes] about two or three years ago and a lot of it was experimenting as a musician/songwriter. But on the album there’s a contrasting body of work and so you will hear hints of stuff. I’m a person who can appreciate a lot of different types of music that will come out [on the album]. Saying that, I can’t wait to get started on the second album, it’s mad.

Will you change the stereotype of the ‘dumb blonde from Essex’?
Yes! That is definitely my aim! People just don’t know what they’re talking about! I’m not an idiot. I’m not blonde – Well, I am blonde… but I’m not what people think! I know new artists are often judged on a lot of things but if I get the opportunity I’m hoping by the end of next year I’ll be singing something different.