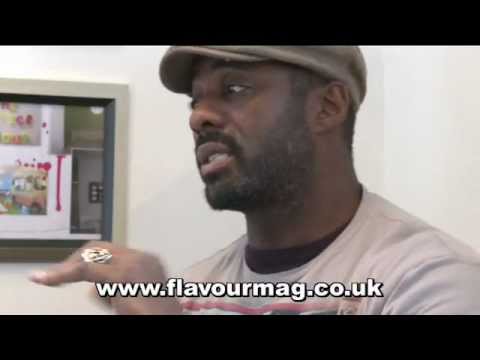 With starring roles in films such as American Gangsta, Obsessed and RocknRolla under his belt, as well as playing the much-loved character Stringer Bell in cult US show The Wire, Idris Elba has now unleashed his musical alter-ego Driis on the world. We catch up with the East London star to talk music, love and giving something back…

ON HIS ALTER-EGO:
Driis is a lot more adventurous in terms of an artist than Idris is. Idris is an actor and I’m an actor. I have a certain goal for acting, a certain type of film; I got my plan for that. Driis is more of a free artist. I like to experiment with my Driis persona.

ON MUSICAL NERVES:
You know what? The nerves always come with making my music because I don’t listen to the radio too much even though I’m a DJ. I really want to have a sound that just comes from this hybrid thing going on in my head. The kind of music I like whether I take it from jazz to reggae to drum and bass. My first EP Big Man was more street to hip hop and spoken word. This EP High Class Problems is more singing, more RnB with a little jazz feel to it. But as I grow, I still want to experiment with more different sounds.

WHY HIS EP IS CALLED HIGH CLASS PROBLEMS:
My lawyer sometimes says that, just as a phrase. Because we’ll all be in a dilemma where something’s clashing with something else, but at the end of the day it’s a high-class problem. Considering some people’s lives are devastated by death, by health, by all others things you know what I mean, and here I am discussing whether I should do a Jay-Z intro or The Wire remake or whatever. And those are high-class problems for me. I love the idea of that, that people you know listen, and don’t forget you are very privileged.

ON THE UK MUSIC SCENE:
I love what Dizzie’s done, I love what Sway’s done and Tinchy. They’ve done fantastic work. They’re being authentic to who they are so I think it’s great. I think it’s fantastic – real healthy for the UK music scene. Then we’ve got the greats like Sade about to come back. There are a lot of artists in the UK that own their sound.

ON SELLING HIS MUSIC:
This is a weird time to try and jump into the music industry. To be honest with you, the way I set up, the way my music gets out, you know I have my own label and I don’t have anyone sort of pressuring me to do it in a certain way. If I sell ten copies, that’s successful to me, based on the fact that I don’t have any expectations to sell 100 or 10,000 copies like some labels have. But I’m optimistic, my music is cool and my goal is just to reinvent your ears a little bit.

DRIIS TALKS ABOUT GIVING BACK:
Right now, I’m doing two things. One, I work with the Prince’s Trust as an ambassador for the anti-crime programme and highlight why kids should stay away from violence. One of the things that I did was invite some kids to come and see me. We sat down and watched The Wire and spoke about that – they asked me a bunch of questions. The Prince’s Trust helped me when I was coming up. They gave me a cheque and now they want their money back [he jokes]. And I started my own foundation called the Spread Love Foundation, and what I want to do is try and highlight people who are young in what they are trying to do that need a little bit of encouragement, a little bit of firm guidance, applied from Spread Love. We’ll digest it and try and help in any way. It’s a new thing. I’m still trying to iron out the foundation.

DROPPING KNOWLEDGE:
I always tell people to just know what you’re doing. Like if you want to be an editor or a writer, be knowledgeable of that world. Don’t guess it; everything that you could ever want is in books. Be knowledgeable in anything you’re trying to do, take your time and learn about it. Once you understand it, it’s going to be so much easier to manoeuvre and make moves into it.