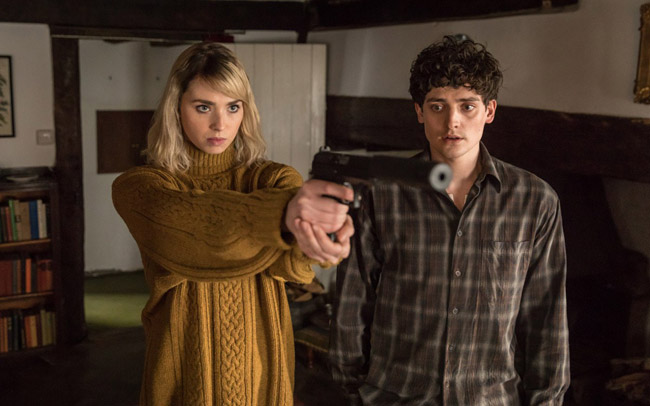 Suicide isn’t usually a laughing matter but for his feature film directorial debut, writer and director Tom Edmunds delves into the subject with a respectful nod and light-hearted dark humour full of quintessentially British problems.

William (Aneurin Barnard) is a struggling writer, essentially cut off from the world, lonely and failing to see the purpose of his life. Having made a decision to end his life prematurely, we are introduced to William during the black of night, mustering up the courage to jump off a bridge. He, however, is not alone. The ominous figure of Leslie (Tom Wilkinson) approaches him, not to talk him out of killing himself, but to offer him assistance in getting the job done, for Leslie is an assassin for hire.

As William fails – being his seventh attempt to top himself – he decides to outsource the job to Leslie but as William’s life takes an unexpected turn for the better when he finally obtains interest from a publisher for one of his books and meets the publisher Ellie (Freya Mavor), he has a change of heart, but calling off the job isn’t that easy.

This is very much a story of two sides; on one side we follow Leslie, an aging hitman who loves his job and fears that his life will become nothing if he stops working. Part of a professional set-up run by Christopher Eccleston’s cockney spouting Harvey, each hitman has to fill their quota’s, rent out weapons and fill out paperwork in accordance with the Guild of Assassins. With Leslie approaching retirement age, up against the younger contract eastern European killer’s he finds it hard to keep up and is in danger of losing his job. While Leslie may be ruthless on the job, he goes home at the end of the day to a normal suburban life and a wife who fills her days with sewing competitions.

Its William’s numerous attempts at suicide that sparks the interest of Publisher Ellie. Having had her own issues and brushes with suicide there is an instant bond between the pair as they go on the run trying to outclass the sniper’s bullet. Where a lot of relationships may seem unnatural in the movies, the element of a shared psychological issue feels like a more natural pairing. In fact, Barnard and Mavor had already worked together as Uncle and Niece as Richard III and Princess Elizabeth in TV’s The White Queen, it certainly had a positive effect on the ease in which they appear to gel.

There is a compassionate and highly amusing investment in Edmunds characters but the picture does have its lull in entertainment value at times. Overall, there is a life-affirming message to be learnt from the darkest of holes. It’s a black comedy of originality whilst still staying respectful to such a serious subject, never poking a judgemental finger.