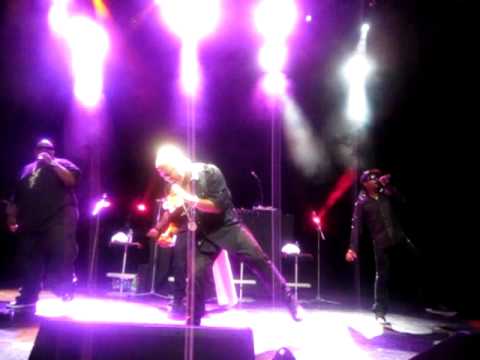 Last weekend, the O2 Indigo played host to the much awaited Dru Hill. A group, who adorned the walls of many young women in the early noughties.

Any RnB group worth their salt is expected to keep fans waiting, causing hysteria, however, this was the first I had seen more than two warm up acts! These included Crystal celebrity, Dele and 2009’s X Factor trio Miss Frank. Of course not forgetting the pioneers of New Jack Swing Blackstreet, who performed ‘No Diggity’ and ‘Don’t Leave’. By the time Dru Hill appeared the air was heightened with anticipation.

We were taken back to a time when R&B singers were more than studio singers and harmonised like they were still on the blocks. Tracks included classics like ‘Tell Me’, ‘How Deep Is Your Love?’, ‘Beauty’. Plus some off their new album InDRUpendance Day like ‘Back To The Future’, but saved ‘5 steps’ until last. This was one group that actually delivered a performance that was as strong as their first. Which came as a pleasant surprise, as others from the same era have tried, and failed, dismally.

Overall the concert was a fantastic display of old skool RnB, potent lyrics and sexy moves that had fans belting out their hits with them like they were on tour too!