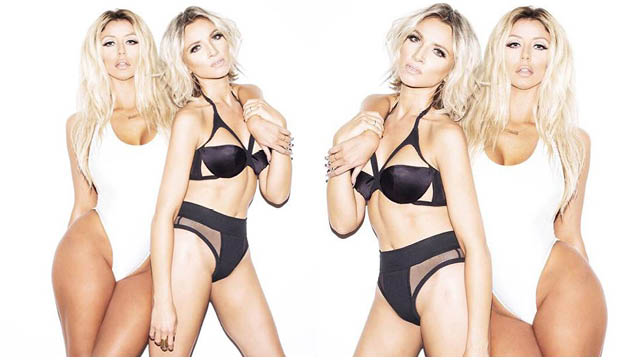 Aubrey O’day and Shannon Bex both found fame on MTV’s popular reality show “Making The Band” way back in 2006 where they competed for a place in P Diddys brand new girl group. They both made the cut along side three other girls and went on to create the double platinum selling, world record breaking, girl group Danity Kane. Unfortunately their run didn’t last for long due to clumsy errors in management and lack of respect from their record label. Since then they rejoined forces with ex members Dawn Richard and Aundrea Fimbres to finish what they started and reformed Danity Kane as a four piece. Sadly the respect still wasn’t their, but this time it was amongst members, and it fell apart before it really begun. Fimbres left during their tour and then shortly after the whole band dismantled due to physical fights during studio sessions. With that said Aubrey and Shannon pushed forward and teased fans with signs of a new duo. Its now confirmed, introducing Dumblonde!

The girls not only debuted as a new duo but they also debuted a hot now look. They took to the red carpet in matching, very low cut, black tailored suits with black and grey locks to match. During red carpet interviews they announced that they will be releasing their brand new debut EP, as a visual EP, next month which will showcase their new sound. The girls stated that Dumblonde’s sound will be completely different to that of Danity Kane’s and that it will head down a more dance type route with similarities to The Ting Tings and La Roux. Shortly after the red carpet appearance they released VIP tickets for a listing party, in April, of the soon to be released EP via their Social Media platforms. So what do you guys think? Are you exited to hear the ex Danity Kane members new sound?

Like the outfits Dumblonde are wearing in the photos above? Then take a look at Agent Provocateur Lingerie and Skinny Bitches clothing.