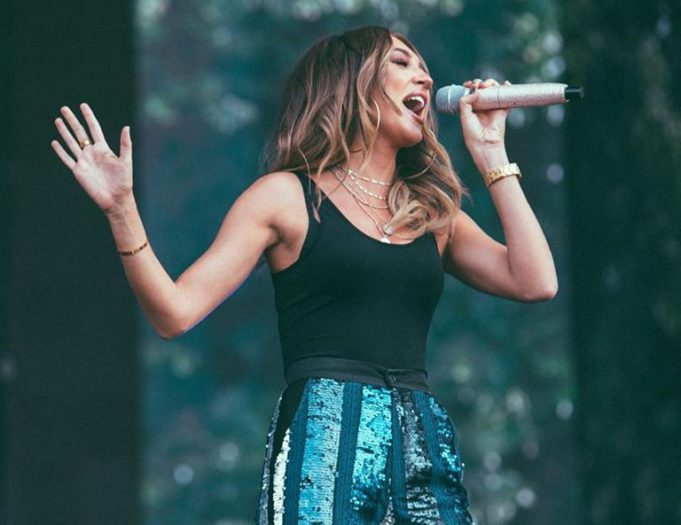 From Reality Star to a Country Music Sensation, Megan McKenna took to the stage at British Summer Time 2018

Previously known for being on UK Reality TV shows such as The Only Way Is Essex and Ex on the Beach, Megan is embarking on her newest adventure taking the country music scene by storm.

Can you tell me about your new single ‘everything but you’?

S- that’s really incredible, how does that feel?

M- it’s absolutely amazing, I co-wrote it with Amy Wadge and I went to her studio in Wales and we just chill and I was like I really want to write a song about my life where I feel like you can have everything you’ve ever dreamed of, an amazing house, family and friends but you just don’t have anyone to share it with and that feeling of wanting to have someone to share it with which is basically the sum up of the song and in the second verse I wanted to put something like ‘please don’t worry, there’s somebody for everyone and someone could walk around the corner any minute and I really wanted to write a song like that! I feel like my music is really personal to me and I think that’s why people really relate to it because everybody goes through things like that.

What’s your songwriting process like? Is it different each time?

M- it’s actually pretty similar, I like to turn up to the studio and have a cup of tea, chill out and talk for at least a couple of hours about rubbish, get a feel for the songwriter and that’s why I like Amy because I really get on with her! We just sit in and chill, I’ll just talk about my life and be like ‘I feel like I want to write about this moment in my life’ and it could be about something four years ago. I really like talking to her about how I felt at the time and I just write it all down and explain how I’m feeling from crying and fighting, I expand from there. – That’s how I write

Do you feel that as a Country Music artist that it’s been harder to break out?

M- this is definitely a harder game if you’re doing country in America, you’re sweet but doing country music in the UK is hard! I think the country music scene in the UK is growing slowly but that’s why my music is a little bit different, it’s very current and country-pop. A lot of people ask me why I didn’t just do dance music or normal pop music and I’m like No, I love country music and it’s all about telling a story! I think I fit perfectly with that because I have a lot going on in my life

Who would be your Dream collaboration?

M- Oh My God! It would have to be Kacey Musgraves and I swear you know I’m obsessed with her! I love her so much!

M- Hmm embarrassing moments on stage? I feel like things have happened but I cant think! Today actually, I walked down the runway and as I turned I saw my name in big writing and I couldn’t believe it, I was so shocked! I didn’t know my name was going to be that big on the stage, I had to tell myself to get back into performance mode

Obviously, you were known before being a country music star but how has your life changed since starting a music career?

M- I’ve noticed that the variety of people follow me and who I see out are different, sometimes now I can see people who are a lot older and they’ll come up to me and tell me how much they love my music! I was in the supermarket and someone will be like “Oh Megan I really like your music” whereas before it was young girls saying “OH MY GOD I LOVE YOU ON THIS TV SHOW” but now it’s completely different and still my whole fan base is really supportive

What’s the best piece of advice you have ever been given?

M- In Nashville, when someone said “Be First or Be Different” and also my Grandad always used to say to me “Do not give up” and he would say that every single time I would be stressed about my music

What has been the most important thing you’ve learnt in the past year as an artist?

M- Take it all in, don’t stress or worry

Are you planning another tour soon?

M- I would hope so, hopefully towards next year! I want to release more music so everyone can learn my tracks more

M- I’ll be releasing a new song; I’ll be back writing and recording more music! I have a book coming out which is really exciting! I’m launching a clothing range called studio mouthy, it will be studiomouthy.com which is going to be all high-end stuff but at affordable prices