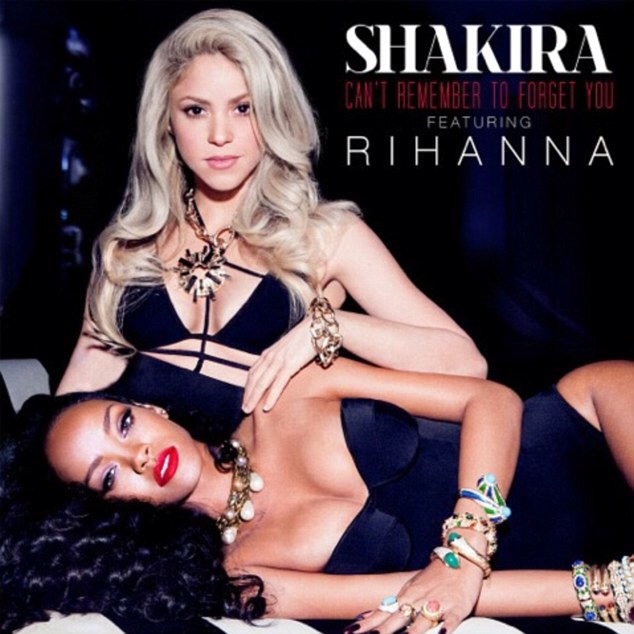 Rihanna confirmed this week that she has teamed up with Shakira for a new single titled Can’t Remember To Forget You.

And on Thursday fans of both Rihanna, 25, and the Columbian singer were no doubt further excited when the cover art for their hotly anticipated collaboration surfaced.

Shakira, 36, is seen shooting a smouldering pose at the camera, as she wears a cut-out black body accessorised with a black and gold medallion and framed by her ever-present tumble of blonde locks. Bling and body: Shakira and Rihanna have revealed the cover art for their highly anticipated duet Can’t Remember To Forget You, out January 13th

Rihanna can be seen reclining seductively in her lap wearing a high-cut strapless black bodysuit and draped in costume jewels in the stunning artwork for the single which is released on iTunes January 14th.

Shakira, who grew up in Barranquilla, Colombia, said soon found she had a lot in common with Rihanna after getting to know her during recording. She told US Glamour magazine: ‘Working with her was utopia. She’s the sexiest woman on the planet. And at the end of the day, we’re both just basically Caribbean girls.

‘The chemistry was so good and so real. She taught me dance moves. She was a sweet teacher.’ Fans will no doubt be treated to something memorable when the video is released. ‘One. Week. Countdown,’ RiRi wrote with a photo. The single, which will officially release on January 13, was first mooted by chart-topping singer Pitbull. Pitbull first teased fans with the idea that Shakira and Rihanna had recorded a duet for the Latina pop singer’s forthcoming album. He shared he originally wanted Rihanna to record the hook on his recent single, Timber, featuring Ke$ha.