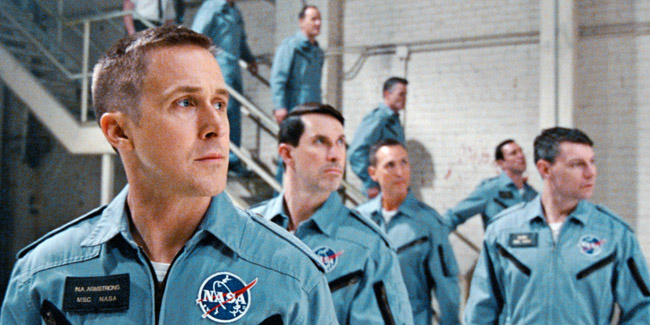 Filmmaker, Damien Chazelle’s last three films have been nothing short of glorious. The man behind the frenzied drumming sensation of Whiplash, and most recently the dancing delight of La La Land, teams up again with his leading man Ryan Gosling. Together they deliver a visually stunning, stoic and sobering biopic on Neil Armstrong. This isn’t all spacewalks and moon landings spectacular but a more intimate dissection of the first man on the moon.

Gosling’s Armstrong doesn’t possess the loud, puffiness Americanism’s you would expect, Chazelle leaves that up to Cory Stoll’s Buzz Aldrin. Instead, Armstrong is armed with a lack of an emotional core. He is a proud family man but with a level-head and meticulous approach to everything. Even the death of his daughter at the age of 3 hits him hard but his ability to internalise his grief only fuels his obsession with space exploration to catastrophic levels.

The majority of the film is spent in the leading years before his significant moment; the trials and tribulations of failed launches and more often than not, the deaths of fellow astronauts that came with those failures. The focus lies on Armstrong and his reactions, his overwrought willingness to get things right on the ground before making that once in a lifetime journey, and the community of fellow astronauts and their families that surrounds them for emotional support. The actual landing on the moon were Armstrong’s iconic line “That’s one small step for man, one giant leap for mankind” was uttered only lands in its breathtaking finale.

Claire Foy as Armstrong’s suffering wife Jan is the backbone of the family. While Armstrong is detached from his home life and lacking that loving bond with his son’s, Jan holds the fort, loving the man that seems so far away when he is stood right next to her. There is one telling scene in which engulfs us in just how much he has cut off his emotion. The night before his launch into space, Jan makes him address the trip to his son’s. His approach is to convey what will happen as a press conference – guarded he asks if there are any more questions.

Lacking in tension and nail sequences, Chazelle still manages to cause a ripple of vibration from the very mouth of the rocket. The shaky camera effect and the sepia tones reverberate through to the bone. It’s when we first hit Space, the visual extravaganza hits home at warp speed. The reflection of the moons surrounding in Armstrong’s helmet and the vision of the earth is otherworldly stunning.

First Man is a slow burn, yes it has blistering rockets and tension-fuelled moments in the cockpit but, essentially Chazelle’s film is about the man, not his historic achievements. A sobering study of grief and obsession delivered with a stunning eye of respect for Armstrong. Chazelle launches his excellence in filmmaking into the cosmos.

First Man is out in cinemas October 12