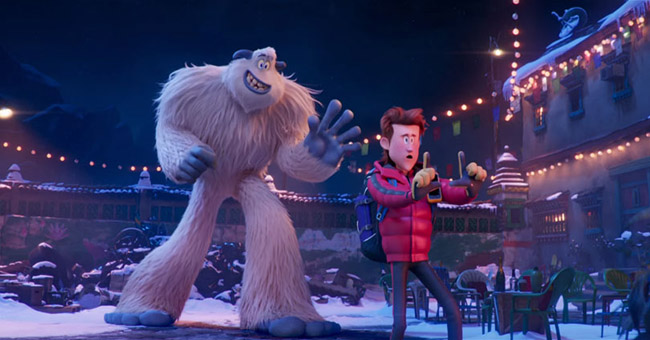 There is a lesson to be learnt in Warner Animation’s newest cutesy animal caper, well not just one, but at least two that the youngest of audiences can take away with them. On the one hand, it delivers the message of diversity in communities, one in which we need to accept those who are different to us despite what we are told. That’s where the second lesson comes in, don’t believe everything we are told! Myths are set in stone but everything should be questioned.

The innocent and slightly dumb Yeti, Migo (voiced by Channing Tatum) and his fellow Yeti’s live high up in the mountain’s, above the clouds and cut off from the human’s below. Migo is the son of the of the village’s gong-banger, whose responsibility is to bang the gong in order for the snail sun to rise each new day. When in training to take over from his Father, Migo misses his target and ends up coming face to face with the mythical Smallfoot aka human. Believed to be nothing but a myth, Migo is banished from his community by the stone keeper for stirring up lies as he tries to convince everyone the Smallfoot is real.

Back in the human town, at the bottom of the mountains, TV celebrity, Percy Patterson (James Corden) needs to come up with new ideas to build audience numbers for his show. Migo decides to prove everyone wrong, and with the help of the S.E.S (Smallfoot Evidentiary Society), he plummets through the clouds and descends the human town. Encountering Percy, Migo decides this is the Smallfoot that will help prove he was telling the truth all along.

The animation here is no Pixar, it’s pretty basic in its efforts but it still delivers in the feel-good stakes. The humour is light and punchy, both kids and adults can jump onboard, understand and enjoy. When the human’s talk, to the Yeti’s it sounds like a high pitch, excitable squeak while, when reversed, even though the Yeti’s are just having a normal conversation, to the humans it sounds like an aggressive growl.

The voice cast, whilst attracting names like Tatum, Cordan and Danny De Vito as Migo’s Father, Zendaya as the intelligent and feisty daughter of the Stone Keeper, Meechee and Common as the village protector, Stone Keeper are hardly noticeable. The characters could have been voiced by anyone and we wouldn’t be any the wiser. It doesn’t matter, there is still a vibrant, and innocence to the story which lives you feeling connected and invested in the messages charming deliverance.

Writer/Director, Karey Kirkpatrick’s animation is more than just jesting comedy aimed at younger audiences; it has a deeper message dressed up in woolly warmth and detail. It’s delightfully filled with family fun that will leave you feeling warm and fuzzy.

Smallfoot is out in cinemas October 12