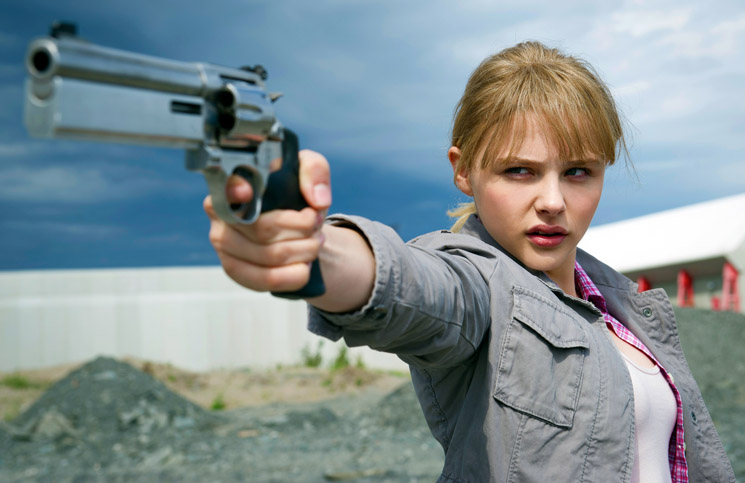 In aid of International Women’s Day on March the 8th we have decided to celebrate some badass women that have graced the big screen over the years.  Here is our Top 10 all time female action heroes. 10. Kate Beckinsale (Selene) (Underworld)
Don’t let Selene’s slight frame deceive you. She may look like a girly girl who wouldn’t harm a fly but not only is she headstrong and stubborn, but her skills with a deadly weapon and the fact she’s actually a vampire giving her superior physical abilities gives her that brutal edge.  How does she prove it well she has come back time and again in not one sequel but a trilogy.

9. Pam Grier (Jackie Brown) (Jackie Brown)
Quentin Tarantino’s 1997 crime drama, Jackie Brown gives us a Smart and Sophisticated fem fatale. You mess with this bad mama, her revenge is sure to be sweet. People have compared Pam Grier’s portrayal of Brown to that of a sexy female Charles Bronson. Basically a clever psycho you don’t want to piss off. 8. Milla Jovavich (Alice) (Resident Evil)
As sci-fi heroines go, Milla Jovavich’s Alice in the Resident Evil story doesn’t quite match to the queen status, however I don’t think any man in their right mind would want to go up against her butt-kicking as she proves she’s worth a thousand men as she fights off hordes of virus riddled baddies.

7. Chloe Grace Moretz (Hit Girl) (Kick Ass)
The one character that stuck out the most in Kick Ass has to be Hit Girl, who would think a teenage girl would make it into the ranks of Top Ten Female action heroes? With her butter wouldn’t melt exterior as soon as she spoke she sounded like she should have been in a Tarantino movie. Oh and did I forget to mention she’s pretty good at kicking the hell out of the bad guy. 6. Jennifer Lawrence (Katniss Everdeen) (The Hunger Games)
Family is everything to Katniss, especially her baby sister. So what better way to protect her than sacrifice yourself. What makes her a real modern day action hero in order to save herself and the innocent around her is her lack of confidence in her ability to fight, endearing her to the hearts of the world.

5. Linda Hamilton (Sarah Conner) (Terminator 2)
You don’t ever mess with a Mother protecting her child, Sarah Connor is proof of this in Terminator 2, Ripped with muscles to make any man jealous and using any weapon she can get her hands on you better watch out if this bad mama catches you anywhere near her child. 4. Anne Parillaud (Nikita) (La Femme Nikita)
Nikita is forced into becoming an assassin but she’s pretty damn good at it. After being arrested for murdering a policeman she attempts to live an ordinary life and to find happiness but she just can’t seem to avoid bumping off a stranger.

3. Uma Thurman (The Bride) (Kill Bill)
The story of Uma Thurman’s mostly unnamed character of The Bride is pretty much a classic tale of revenge. She sets out to avenge the death of her murdered husband and unborn child.  Violence is not always the key for her as she unravels more of what happened, it’s more of a necessity. She’s simply a lethal bad ass killer because she has to be not because she wants to be. 2. Jenette Goldstein (Vasquez) (Aliens)
So the top 2 Female action heroes both come from the same sequel, It was a hard fought out race between Vasquez and Ripley but Vasquez has to come in as number 2. The only reason being the simple fact she could be mistaken for a man. But her smart mouth, brilliant put downs and bad man attitude as she fights off the pointy headed creatures with her flame thrower makes her a very close contender for the number 1 spot.

1. Sigourney Weaver (Ellen Ripley) (Aliens)
In James Cameron’s 1986 sci-fi classic, Aliens, Sigourney Weaver’s Ellen Ripley really lets rip (pardon the pun).  Not only does she wield a M41A pulse rifle, but she knows how to use it. If you wanted anyone on your side, to save you’re sorry ass from the freaky headed Alien. Not only does she take on the Queen of these ugly monsters one on one but she delivers one of the most famous one liner’s of all time “Get Away From Her, You Bitch” making Ripley one Female action hero we will never forget. What do you think of our top 10? To you agree or Disagree?? Or if you think we have missed someone that should be on this list then simply leave your comments below.