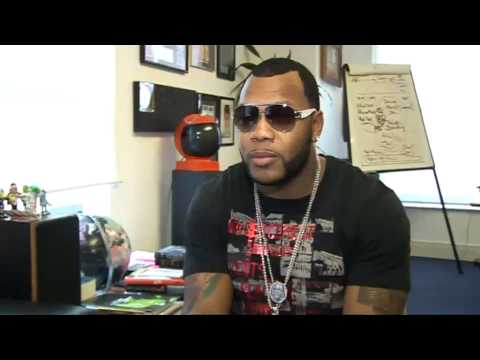 It was a bright but breezy Tuesday morning when I headed down to Atlantic Records to meet Tramar Dillard, better known to most as Flo Rida. In the UK promoting his new smash single, Right Round and forthcoming album, ROOTS (Route Of Overcoming The Struggle), Flo is no stranger to hard work. Grinding for 12 years before making it into the public eye, Flo Rida’s success has taken time, dedication and a lot of sacrifice. In this exclusive interview with Flavour, Flo Rida opens up about everything from his close relationship with God to his ideal type of woman.

Who or what inspired you to get into the music industry?
I have been around music form very early on. My sister was a gospel singer and my dad played different instruments. Also, being around the 2 Live Crew from a young age was inspiring for me. I used to see the nice cars and the pretty girls they had and I wanted to have those kinds of things too.

Your debut single Low had phenomenal success and has been in the UK Top 75 for over a year, why do you think this is?
It’s a club track and we love the club environment over in the states. People love to have fun and that tune makes people smile when they hear it. Guys like to see women get low and women like to see other women get low as well. T-Pain co-wrote that track and I think people enjoy the fact it is a fun record.

Congratulations on smashing the record for the most digital one week sales, with 636,000 in the US for your new single Right Round. What are you doing to celebrate?
I do pop bottles and things like that, but I also like to continue working. When I get this kind of news, it definitely makes me happy. To know that I sold more than my last record and it is not around Christmas, like Low was is definitely a blessing.

What can we expect from the new album, Roots?
This album was inspired by the fact that I just came from Africa, where I won an MTV award for most downloaded video. In Africa, I got a chance to see a lot of people struggling. I have been through a lot of my own struggles so I entitled this album Roots because I want people to know that I have definitely been rooted from the ground up, as far as music goes. There are records on there that represent how I made it, by keeping the faith. There are more soulful records on this album, but we still have a lot of party joints on it too. I want people o know that this guy has really been through a lot.

What has been the biggest obstacle you have come up against so far and what have you found is the key to overcoming obstacles?
Probably my sister passing away, as it really motivated me for the fact that you are never promised tomorrow, so from then on I took advantage of every day. You have always got to put God first and make a lot of sacrifices. You also need to have faith and always give 100% to overcome obstacles.

What is one of the best bits of advice you have been given?
The best piece of advice is to work like you don’t have a record deal

What has been the toughest lesson you have learnt thus far?
Sometimes you get into a situation where you feel like you are so close to your dream and everything being perfect for you, but you have to be prepared for the worst because things may not always go to plan!

Do you have any regrets?
Not at all, because everything that I thought was bad actually shaped me up for everything I have now.

Is there a Mrs Flo Rida?
(Smiles)Yes! (Looks over glasses and straight into my eyes) She is right in front of me.

(Laughing and blushing) No, Seriously?
Nah, I am single.

So, what are the top 3 qualities you look for in a woman?
She has got to believe in God
She has to have dreams and goals and at the same time believe in herself
And if she is sexy, that’s even better

Your new album, Roots drops March 31st. What else can we expect from you in the remainder of 2009?
Just making more hit records. I have also got my clothing line poppin’ off for both women and men. The clothing label I am launching will make you instantly feel as if your swagger is up!

What advice would you give to aspiring music artists?
Be prepared for trials and tribulations, ups and downs. Those things will make you better and help you to appreciate everything once you accomplish your goals. Always put God first as there will be a lot of obstacles in front of you that you won’t understand. Prayer is another good way of having faith and faith moves mountains.