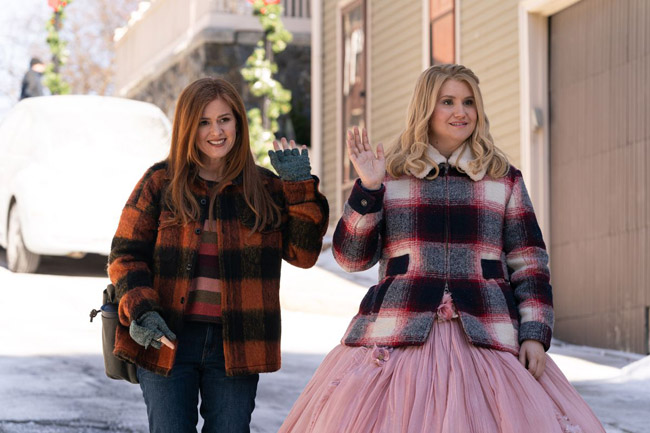 A modern-day Elf for feminists, whilst enjoyable for its escapism, won’t be turning any frogs into princes any time soon.

It wouldn’t be a festive period without the magic direct from the house of mouse and the promise of a “Disney Princess”. So teaming up with Bridget Jones Diary’s Sharon Maguire, expectations are high to bring home that feel-good nostalgia but this modern-day Elf for feminists, whilst enjoyable, won’t be turning any frogs into princes any time soon.

Also drawing on comparisons with 2007’s Enchanted; Jillian Bell takes on the role of Eleanor, a young godmother in training in Motherland, a land straight out of the Disney Castle textbook, but its whole existence is under threat with the belief of the outside world that Happy Ever After really doesn’t exist (not far wrong there). Enter Eleanor and her innocent naivety on a mission to save her world from crumbling around her. Finding the last letter from a 10-year-old believer, Mackenzie from outside Boston, Eleanor takes on the task to travel outside her world to make all this girls dreams come true.

It turns out; Eleanor just might be too late, when she finally finds Mackenzie (Isla Fisher), she’s a grown woman, a single mother of two daughters, a producer on a news show and quite frankly, jaded by life’s blows, but none of this stops Eleanor’s constant jarring enthusiasm to find that fairy tale ending for Mackenzie, whilst finding a connection with her young daughters to really bring them out of there shell.

Bell’s Eleanor bumbles and fumbles with her less than mastered spell-making skills into every situation, whilst donning that age-old ball gown while not raising a single eyebrow. Causing viral opportunity after opportunity inadvertently she enhances Mackenzie’s career prospects accompanied by the staple animal helper with an attitude.

The Disney princess fairytale formula, whilst watered down, still lives at the heart of this film with its saccharine-sweet sentiment but it’s been given that injection of the 21st-century female attitude and relevance of our current world. The attitude where finding the love of our (non-existent) prince charming is the top of all our supposed wish lists has diminished, but the very idea still exists in some form with Mackenzie’s single-parent male colleague. However, the idea of finding and giving love and true love doesn’t fall solely at the feet of a romantic plotline.

Despite the update on the staple Disney princess storyline Maguire’s film fails to reinvent the wheel, can come across as annoyingly sweet and feels like it’s trying too hard but it’s a more than an enjoyable welcome distraction from our gloomy pandemic situation where a bit of Godmother magic really would come in handy.