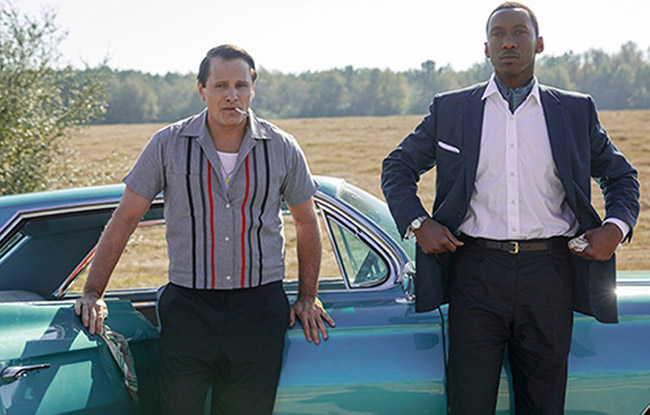 A charming road trip which is truly affecting. Farrelly’s has delivered a touchingly tender bromance story in the face of adversity.

Controversies aside, Peter Farrelly’s latest is not quite the hard-hitting film you would expect from a based on a real-life story set amongst the racial tensions of 60’s America. Instead, he uses this opportunity to offer a feel-good drama with a respectful acknowledgement, a far cry from his previous work of There’s Something About Mary.

Set in the early ’60s, Viggo Mortensen plays the Italian hard man and Mafia ‘friend’ Tony. His days as a bouncer at the local New York Mafia joint (which is also featured in Goodfella’s) come to an end as the place is shut down for refurbishment. In need of employment, Tony is recommended to a classical pianist, Donald Shirley (Mahersala Ali) for a position of driver for his tour of the Deep South, but most importantly his bodyguard.

The men are the provably chalk and cheese, Tony, whilst not articulate or highly intelligent, has a lot of street smarts but his views on African Americans, which was the norm amongst most Italians in the ’60s, was of ignorance – he even goes as far as throwing out two drinking glasses that two black workmen drank from in his home. Donald is highly educated and refined, living in an apartment above Carnegie Hall, his home has a throne and he mixes with the hoi poly of the city. Ultimately he is a lonely man who mentally struggles with his own identity. Not only rejected by his ‘own people’ for his ‘white’ attributes but hardly socially accepted by the privileged white folk he so often performs for.

With a Green Book at hand – a travel handbook for black travellers who want to avoid the racial aggravations by informing of safe places to stay, where they aren’t allowed to travel at night and the venues they can relax in – The two men butt heads throughout most of their journey but they each have something to offer the other. Donald opens Tony’s eyes to his way of life, teaching him about and how to love classical music and helps Tony write perfect love letters to his wife while on the road. In return, Tony educates Donald on fried chicken and Soul Music.

Ferelly delicately handles the issues of the racial prejudices of the time; it plays out like a gentle reminder that the recent racial discrimination has always been a part of American culture but shines a light of hope that those medieval views can be flipped with an open mind and a willing heart. Even though Donald cuts a fine shape in a sharp suit he is still open to physical and mental abuse and excluded from dining in venues he has been hired to perform and Tony, not just because Donald is paying him for protection but through the bond, they have built, is by his side.

Both Ali and Mortensen are effortlessly exceptionally in their roles. Ali’s cold demeanour never visibly waning but through his expression alone, portrays the mental torment and vulnerability of a man who truly doesn’t know where he belongs with gut-wrenching humility. Mortensen’s Tony is gracefully street, even though he has the appetite of a starving animal, he’s confidently staunch in his priggish ways but so easily flips the switch to compassionate brother.

A charming road trip which is truly affecting, Farrelly’s gem gives us a touchingly tender bromance story in the face of adversity. At its very core is an eye-opening story of the bond between two men who come from two very different social spectrums.

Green Book is out in cinemas February 1st