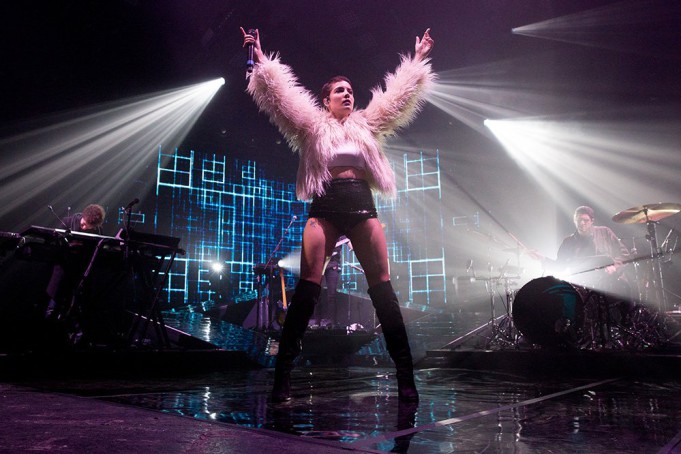 As a dystopian vista consumes the backdrop, the distant noises transcend into something more familiar, as Halsey emerges onto the stage in thigh-high boots, tiny black hot pants and a white furry jacket, launching into Gasoline: one of the harder hitting tracks from her debut album, Badlands.

From the moment she emerges on stage, Halsey oozes authentic sexuality; she’s dark, raw, rough around the edges, and probably the best new artist you’ve never heard of. But evidently plenty of people have; Badlands has sold over 1 million copies worldwide and her UK tour sold out within half an hour.

“In real life, you wouldn’t want to be my friend,” Halsey says, but it’s on the contrary for the thousands of young faces staring up at her, awe-stricken and chanting back every word that rolls off her tongue. Halsey’s wild, reckless and slightly damaged actuality courses through her music; her album Badlands was named after her state of mind whilst writing it, identifying a physical place as a metaphor for a desolate and lonely mind. “We are the new Americana, high on legal Marijuana,” the room recites eloquently to New Americana; an anthemic ode to 90’s kid’s “raised on Biggie and Nirvana.” The military percussion, xylophones and synth make it a stark contrast to darker songs on the album, such as Haunting or Control, where Halsey wrestles with her demons in a shrewd personification of her bi-polar disorder.

Perhaps her biggest hit to date, Hurricane from her debut EP Room 93, stirs the biggest crowd reaction. Lit up by a sea of airborne camera phones, young women throughout the venue sing in unison, “I’m a wonderess, I’m a one night stand, don’t belong to no city, don’t belong to no man,” almost overshadowing Halsey’s sensual and husky vocals, only just identifiable over the bassy synth. Despite the evening drawing to a close, the atmosphere is electric, the sea of hands continue to ripple across the venue into Young God, a dark and twisted love song with bold lyrics. “If you wanna go to heaven, you should fuck me tonight” the crowd sings ardently to the young woman before them, mature beyond her years, as the dystopian visuals trail off into darkness.

Earlier in the evening, Halsey gave a glimpse of a more vulnerable side, “I hope to god that you don’t get sick of me” she confided – looking at the 5,000 people at Brixton’s o2 Academy, I don’t think that will be happening any time soon.