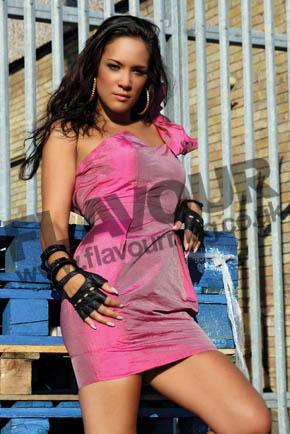 After meeting stunning soul/rock singer-songwriter Hannah-Rose, you can tell there’s never a dull moment when she’s around. She sashays into the studio and greets everyone with a smile and hug as she says ‘Hello!’ with her bubbly northern accent and a presence that fills the room. Having just arrived in London from her hometown of Blackpool, she’s eager to get the shoot started. With her Sicilian, Hawaiian and Caribbean roots and tall, slim frame she already looks stunning. Still, our style team work on her for an hour before she cries, ‘I’m ready!’ as she stands and admires herself in the mirror. ‘I love these gloves,’ Hannah-Rose continues, playing with her hot pink Michael Jackson-style gloves.

‘I just love clothes,’ she says. I’d describe my style as naughty Audrey Hepburn meets Dita Von Teese, but without the burlesque element.’ Hannah-Rose won the News Of The World’s music competition Search For A Star, which was judged by Louis Walsh, she’s also worked with award winning songwriter/producer Danny Gee (Stargate) and was then talent-spotted in 2007 by Charles Gordon Management when she was the finalist for Urban Voice. As she confidently struts onto set and pouts and poses with ease, with each click of the camera you’d believe that life was perfect for the singer. She has previously had a number-one single in 15 different countries with her self-penned dance hit Dreaming, and now she’s gearing up for the Double-A release of her forthcoming tracks 17 Days and Superman. But looks are deceiving, as life is far from perfect as I soon discover. ‘I have recently just been diagnosed with cervical cancer,’ she says. Not knowing what to say I go quiet for a few seconds, before I muster ‘I’m sorry to hear that.’

Having a realistic outlook
‘It’s okay,’ she says smiling with a cheer in her voice trying to lift the sudden sombre mood. ‘Sorry, to drop that on you, I just want to be really vocal about it. Although, I’ve got cancer and it is a really scary word, I’m going to go for all the treatment and I just want people to know, especially young women that a positive diagnosis doesn’t mean that you’re necessarily going to die.’

Don’t fear the worst
With Jade Goody’s highly publicised death from the disease, ‘cancer equals death’ is what a lot of people may think. With Hannah-Rose being 27, the same age as Jade, is she thinking the same thing? ‘No, I’m not,’ she states adamantly. ‘I just want to let young women know that even if the worst comes to the worst and you have got cancer, it’s very unlikely that you’re going to die at such a young age. There are many treatments out there that can fight it and you’ve got to remain positive.’ She owes a lot to reality star Jade. ‘Jade saved my life. I wouldn’t have gone for a smear test unless she hadn’t been out there in the media.’

Luckily, she did go for the test and she’s confident that she will beat disease. Receiving this diagnosis has also made her think more about her life. ‘Since I’ve found out everything that’s been going on with my health, I’ve stopped and looked back and thought: I should be really proud of myself ‘cos I’m always thinking about getting to the next level when I should just enjoy the moment.’

Straight from the heart
Hannah-Rose has previously been busy working on her album Sorry To Keep You Waiting. ‘Every lyric and every beat you hear on there is from me and it’s true; it’s real life that I’m writing about. So for me to have the finished product of the album, regardless of what happens with it, I’m so proud to have my album. Even some of the most successful acts can’t say it’s their album – but this is all me. So it’s down to me if it’s rubbish!’

Her father was a bass guitarist, so music is in her blood. ‘Some of my earliest memories are stepping over groupies who crashed in the front room to get my school books,’ she laughs. With her strong, unique, soulful vocals and rock-chick attitude, Hannah-Rose is definitely a name to watch out for. ‘Whatever happens I’ll come back stronger,’ she says.

To see the full gallery from the flavour shoot click here