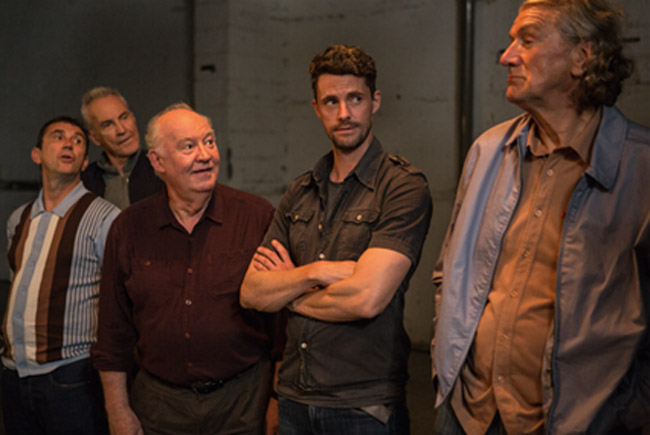 Described as the most spectacular British crime of this decade, the Hatton Garden heist surprisingly wasn’t just notorious for the theft of £14m of valuables, but perhaps more so because of the men behind the burglary.

Experienced thieves, yes, but also pensioners. This somewhat bizarre crime scene has been brought to life in spoof flick, The Hatton Garden Job, where those older and more experienced take the reins from the likes of Guy Ritchie’s younger regulars, to bring laughs and hustling to the big screen in their own style.

The Hatton Garden Job tells the story of the heist from the perspective of the unknown, and not convicted, member of the gang, played by Matthew Goode, who is never actually named. We follow him all the way through having the heist proposed to him by crime boss Zslondos (Joely Richardson), to assembling his team of thieves played by the likes of British TV legends Phil Daniels and Larry Lamb.

While not outstanding in the league of British gangster films, having a set of characters of a different age breeds the opportunity for a new style of humour and hijinks, breathing some new life into a film that does steal a lot from other successful movies in the genre. It’s the little things to look out for, like the gang bringing a packed lunch of sandwiches to the heist, or the quippy additions Daniels adds to his dialogue.

Despite the all too familiar stylistic choices with the editing and narration, particularly noting the intro scene, The Hatton Garden Job brings more of a feel-good chirpy tone. There are enough genuinely funny moments with solid performances, despite perhaps suffering a little in overall quality; clearly a lot lower budget than a Ritchie feat.

The editing and pacing work well, for the most part, faltering slightly when the story slows. Despite being shorter than the average run-time for recent years, The Hatton Garden Job could have benefitted hugely from keeping up its pace and cutting down to a tidy 80 or so minutes, packing in everything that’s great but trimming away the stuttering plot where the emotional pulls don’t have quite the impact it seems were intended.

If The Hatton Garden Job was pooled with the likes of Snatch, it would suffer in comparison, but that’s not to say it doesn’t do its own thing well. Whereas if we flip the coin, it’s a film that could push a crowd looking for a feel-good movie to a slightly grittier story, without having to sacrifice the upbeat tone.