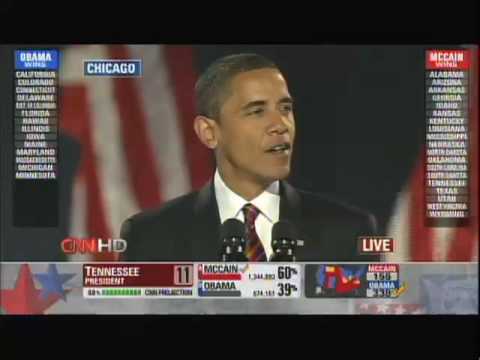 Today, history has been made. A black man has been voted as the President of the United States of American. I was woken up at 4am by text messages from friends in the US, UK and Ghana alerting me that Barack Obama had won. Immediately I struggled in the dark to find the remote to switch on the TV to hear for myself. The first pictures I saw were Jesse Jackson and Oprah Whinfrey crying and then pictures of celebrations live in Chicago, Time Square, outside the White House and even in Kenya. When it was announced the cheering went on for 10mins. I watched and waited until 5am to hear Obama’s speech and was immediately captivated as soon as he hit the stage.

As he walked out with his wife, his rock Michelle and his children it warmed my heart. His speech was moving, emotional and extremely powerful. The highlight for me was when he talked about Ann Nixon Cooper the 106 year-old woman who has been alive when there were no cars on the road, no planes in the sky and couldn’t vote because of the colour of her skin and the remains of Slavery were still present in American. It was only 60 years ago when civil rights activist Martin Luther King marched to Washington for jobs and freedom for black people and now Ann Nixon was in 2008 was able to vote for a black man as the leader of the free world.

Obama is the 44th President of the United States of America. He takes the lead at a time when the country, in fact the world is in crisis. He would need super powers to make changes immediately and the level of expectation for Obama is immense. However, as Obama is a beacon of hope, opportunity, freedom and democracy and been able to bring various segments of society together and make them united because of this despite the state of the world I think Americans will be willing to wait and work with Obama to help him heal the wounds of George Bush and put the US and relations with the likes of Iraq and Afghanistan in a better place.

I think we will have to wait a while before there is a black family in Number 10 Downing Street, but Obama’s victory proves that anything is possible. My motto is difficult takes a day and impossible takes a week if you keep your eyes on the prize. Obama is a testament to that statement and if you know you have a dream, what are you waiting for? Go out and achieve it. The world is yours for the taking. After all, we are ‘Free at Last!’

Obama will be sworn in as President of the United States on 20th January 2009. Let Flavour know your thoughts by leaving your comments below.