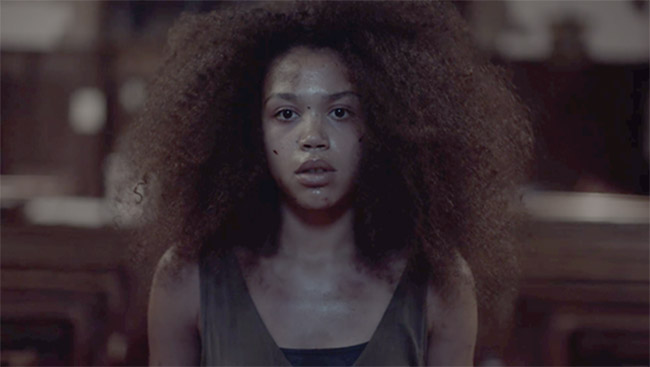 It’s not an easy leap to jump from directing commercials and music video’s to feature-length films, but Ed Morris takes that leap of faith with his debut in this affecting British drama exploring themes of loss and separation lead by Bridgerton’s Ruby Barker.

The story focuses on Yakira (Barker), a wayward teenage girl who has never gotten over the grief of her mother dying young. To add insult to injury her father moved on to his next relationship so quickly it resulted in her sister Kelly (Lily-Rose Aslandogdu), being born a year after the death. Thanks to that grief, Yakira is haunted by a recurring dream of not wanting to let go of her mother and is in a constant battle with her younger sibling. The tipping point arises when her Father (Jamie Michie) and her stepmother (Miranda Nolan) announce their separation and that Yakira and her Father will be moving to Scotland.

Yakira only sees one option; she kidnaps her sister, steals the family car and makes off into the night in a bid to salvage some kind of relationship. Aslandogdu really holds her own as the 12-year-old, a feisty young girl with a whole lot of attitude that would see even the most patient of us turning back and taking her back home. However, Yakira has a plan that gets thwarted with a diversion when she inadvertently picks up a creepy hitchhiker.

It’s this said hitchhiker that is very much the unnecessary third wheel, it raises the question whether this weasel-looking white suit donning individual really is just a drug dealer or is there something a bit more sinister to his agenda. The plot concentrating on the rebuilding of the relationship between the –stepsibling was enough, to throw this into the mix takes it off course.

Barker excels as Yakira, the teenage angst and pain is not only etched in her performance but heartbreakingly across her face taking the realistic and sometimes surreal tone to believable heights. The constant battle of sadness and resentment between both Barker and Aslandogdu open up the conversation about how adult’s actions and behaviours, which are never addressed, affect their children more than they know.  On the flip side, with Yakira and Kelly’s disappearance, the cracks deepen between their distraught parents highlighting the lack of any real affection, the conflict of the dead wife still haunting Yakira’s father and infidelity as the contributing factor of the separation.

With awards for both Best Feature and Best Actress from the British Urban Film Festival, Ed Morris is off to a flying start to his feature film career. He captures the pain and anguish of fragmented families that bury their issues under the carpet with potent realism.

How To Stop A Recurring Dream is out on digital streaming platforms on 9 March.