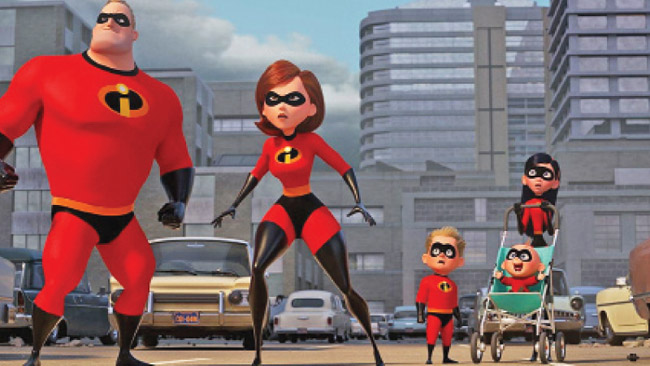 It’s been 14 years loyal fans of the Pixar superhero caper have had to wait for the Incredibles sequel.  In a time when superhero movies are ten a penny and the looming sequel curse hangs heavy over its head; can its charm and appeal still hold up? With Brad Bird back at the helm, the family animated feature deservedly saves the day.

Thankfully avoiding the need to skip a number of years to explain its absence we join the Parr family of Mr. Incredible (Craig T Nelson), Elastigirl (Helen Hunter), Violet (Sarah Vowell), Dash (Huck Milner), the adoringly powerful Jack-Jack and Frozone (Samuel L. Jackson) as once again superheroes are banned after their disastrous efforts against Underminer. Mr. Incredible begins to get itchy feet, dying to get back into the lyric outfit and fight crime, but Elastigirl has other ideas. That is, until, the owners of Devtech, Winston Deavor (Bob Odenkirk) and his sister Evelyn (Catherine Keener) want to reverse the perceptions of the superhero community.

Presenting the Parr family with an opportunity they cannot refuse to restore the public’s faith, but this comes with a price to the Family. The Devtech pair wants Elastigirl to be the face of the revival booting Mr. Incredible in the ego as he gets to become the stay at home Dad, looking after the kids. It’s not long before a new threat emerges in Screenslaver and Elasitgirl is sent out to save the day, but all is not what it seems.

At a running time of just over two hours, there is a lot of ground to cover. It’s commendable that Bird, as the screenwriter, has addressed the role reversal issue. The issue of the wife going out to combat evil while the husband stays at home to look after the kids, it’s Mr. Incredibles moments at home that can drag out and dampen the pace. Not only does he have to deal with his teen daughter’s first crush, getting it spectacularly wrong, but the lovable Jack-Jack starts to show exactly what superpowers he has with hilarious effect.

What made the first incredibly delightful, was its charm and its back to basics tone. We can safely say the sequel stays faithful to its predecessor. Its similarities in the storyline are completely forgiven thanks to action-packed sequences, which are no less than gripping, thrilling and full of smile-inducing surprises. There is no better scene, than when the family come together as a unit towards the end; the slickness in the set-piece glides through the sequence with precision and awe. What looks so effortless to the audience must have been a painstaking undertaking from the animators and for that alone they should be more than congratulated.

Incredibles 2 doesn’t try to be funny, it just effortless is. It’s a heartfelt joy with a commendable stab at social commentary. A roller coaster of a ride this is one sequel and superhero movie that beats the enemy with graceful joy.

Incredibles 2 is out in cinemas July 13.