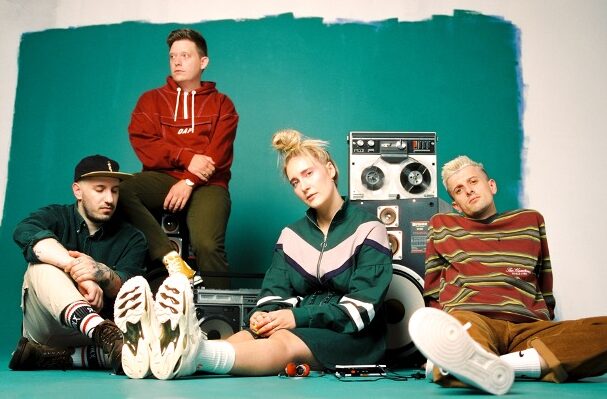 Fickle Friends announce upcoming EP ‘Weird Years (Season 1)’. What’s changed since Fickle Friends released their Top 10 debut album ‘You Are Someone Else’ in 2018? In short: everything.

They’ve experienced a tumultuous time, but the band have emerged all the stronger for it, with a bold evolution in their sound and new-found creative independence. It’s all reflected in their upcoming EP ‘Weird Years (Season 1)’, which will be released on January 15th.

With their new track ‘What A Time’ just released, we thought it would be a perfect time to catch up with Natti.

Tell us about how you all first met? Was there an instant musical connection?
We all met at uni in Brighton. Sam and I had moved down from and had played in a couple of bands together so we knew we vibed. Jack was in my songwriting class and we got put together for a Christmas duet in our first year and instantly had some musical chemistry. Thus FF was born and Jack brought his old school mate (Harry) on board to play bass. I remember him turning up for a kind of “audition” if you could call it that…and he already knew ALL the songs and SLAYED.
Your new single ‘What A Time’ is very relevant to what we’re living through right now. Was that intentional?
I write a lot of songs about escapism. Purely because that’s what listening to and writing music is for me. It was completely intentional to write something relevant to what we are living through. I’ve spent more hours in my bedroom, trying to be at peace with everything than I have anywhere else this year. What A Time is that experience put into words and music.
What can you tell us about your upcoming EP ‘Weird Years (Season 1)?
It’s the first instalment of a multi-part album. Each song kinda tells a story of a moment from the past couple of “weird” years. Conceptually, we cover a lot of ground…love, loss, mental health, the pandemic, feeling lost…hopefully there’s something in there for everyone. We have also started a creative collaborations project alongside Weird Years, where we are aiming to inspire and encourage creativity in a time where we all feel a little…uninspired perhaps.
How would you define your music?
Songs for festivals stages….haha. We get pigeon-holed as all manner of genres. Mostly along the lines of indie/synth-pop. I guess that kinda covers it.
What makes you most excited and/or scared when releasing new music?
Most excited because you’re putting something you’ve poured your soul into out in the world. It’s like standing on a table in the middle of a restaurant and shouting “HEY, THIS IS WHAT I HAVE TO SAY”. Mostly scared that it won’t “perform” the way we would hope….but to be honest we don’t like to think like that. Sometimes music will connect with millions, sometimes only a handful of people. Either way, you’ve reached someone out there and that means something.
What do you like to do outside of music that contributes to your musicality?
I can’t speak for the others right now but for me, I love to read EVERYTHING. I’m pretty spiritual and I teach yoga and meditation which allows for a lot of self-exploration…which is kinda what I do with writing lyrics. I find it also allows me to meet so many people with different things going on…I don’t always write about my own experiences…sometimes it comes from conversations with friends and brief encounters.
Looking back from your first gig ever to now. How do you feel like you’ve grown during this time?
We are much less eager to please! We did a lot of things for the wrong reasons, or because someone told us we should. Growing in confidence means we question ourselves less (Less being the operative word). We write the music we wanna write and we create a show that we would enjoy if we were watching it.
Is there one track by another artist and/or band that you wish you wrote?
I mean there are MILLIONS. But off the top of my head…Vienna by Billy Joel.
What’s one thing you hope fans take away from your music?
That everything they feel is relevant, and everything they are is excepted.
What would be the theme tune to your life?
Probably too “sad” an answer…but Owner Of A Lonely Heart by Yes. I think lonely is what I feel most deeply and consumes me the most in my life. It’s a weird one. But it’s a banging tune so you kinda don’t notice the melancholy. Just like the songs we write.